There was a very interesting story written by Tim Crowther on Phiona Mutesi, a chess player from Uganda. ESPN The Magazine feature the 14-year old player from a small Ugandan town of Katwe. It is an intriguing story showing how she came to learn the game of chess and her amazement of traveling thousands for miles away to Siberia to compete in the Chess Olympiad. 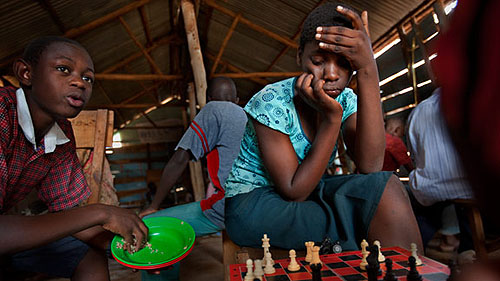 Phiona Mutesi playing in her hometown of Katwe, Uganda.
Photo by Stephanie Sinclair.

ICE? THE OPENING CEREMONIES at the 2010 Chess Olympiad take place in an ice arena. Phiona has never seen ice. There are also lasers and dancers inside bubbles and people costumed as chess pieces marching around on a giant chessboard. Phiona watches it all with her hands cupping her cheeks, as if in a wonderland. She asks if this happens every night in this place, and she is told by her coach no, the arena normally serves as a home for hockey, concerts and the circus. Phiona has never heard of those things.

She returns to the hotel, which at 15 floors is the tallest building Phiona has ever entered. She rides the elevator with trepidation. She stares out of her room window amazed by how people on the ground look so tiny from the sixth floor. She takes a long shower, washing away the slum.

This would be the first time Uganda would send a girls team. This event would provide Phiona will a lifetime of experiences all wrapped in a two-week period. She encountered the world of competitive chess and discovered that chess is played very differently than in her village. This article provides a lot of lessons, but also show how chess can enrich one’s life.

Read, “Game of Her Life” (ESPN: The Magazine)