Very exciting day today at the World Chess Championships between world champion Magnus Carlsen and challenger Viswanathan Anand. With Anand playing the white pieces, he opted for 1.d4 and faced the surprising Queen’s Indian. Anand showed the depth of his preparation once again as he had no way of knowing that Carlsen was going to essay the QID, but played some enterprising moves. For example, 13.d6!? was a tricky move requiring care as black to avoid getting a worse position. On 13…Bxg2 white plays 14.dxe7 Qxe7 15.dxe5 Bxf1 16.exf6 Qxf6 17.Qxf1 and white has two minor pieces for a rook… clearly for choice.

Carlsen opted for 13…Nc6 14.dxe7 Qxe7 15.Bg5 h6 16.d5! There were a couple of queen sack variations stemming from 16…Rad8 17.Bxf6 Qxf6 18.dxc6! Rxd1 19.Rxd1 with compensation. Anand continued to forge ahead with 20.Nd5! sending Carlsen into a think. The champion had to tread carefully at this point. If on 20…Qxb2, then white wins two pieces for a rook in a long, forced variation. Carlsen had a keen sense to take the knight end though it would render his knight immobile on the rim. 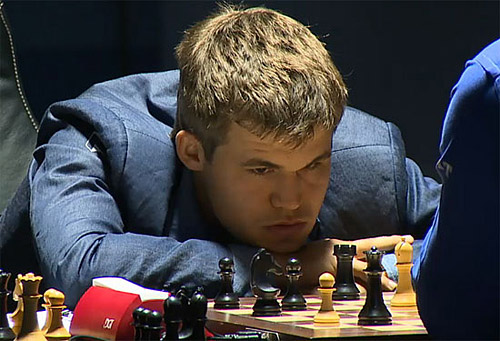 This was a tense moment for Carlsen. He decided on 23…Qf6 and treaded safely.
Photo by Chessbase.

Finally, Carlsen bit with 22…Qxb2 which receive condemnation from the commentators. Now a pawn down, white compensates by applying immense pressure on the central files most notably the f7-square. With a high sense of danger, Carlsen played 23…Qf6 and faced 24.Qxf6 gxf6 25.Re7 Kg7. White could have improved on 26.Rxa7 with 26.Kg2 threatening 27.Bxf7! However, after taking the pawn, the game had reached a critical moment. The commentators felt that Anand still had some slight chances after 26…Nc6 27.Ra4 stifling the knight and going for a superior ending versus black’s weakened pawn structure. Hikaru Nakamura disagreed.

Carlsen is worse, but he should draw relatively easily. I don't understand the commentators at all.

After 27.Rb7?! the game transpired into a quick liquidation and they shook hands. This must certainly be an uncomfortable position for Carlsen as he was under pressure once again. Team Anand seems to be getting the better of Team Carlsen in terms of preparation, but with the match still tied, Carlsen can press with white for the next two games.

The Journal of Chess Research