Things heating up in the U.S. Championship as Kamsky beat Lenderman for the latter’s second loss in a row which helped Akobian leap into the lead with 5/7. With Kamsky second on 4.5 and a quartet of players with 4/7, this could very well come down to the last round of play.

Kamsky essayed the King’s Indian Attack in traditional style. What was amazing was the fact that black seemed to have a very solid structure other than the weak a-pawn. Ultimately, black lost the pawn and was tied down to the defense of the g7-square and backrank possibilities. The white pawn only had to march up the board and eventually deflect the black queen away. Lenderman resigned before the end.

Akobian obtained the lead by outplaying Robson, who has suddenly faded in the last four rounds with three losses. In his game with Akobian, he tossed a pawn when his pieces became jumbled. Black’s solid structure allowed no counterplay and white had to donate a pawn for nothing after 23.h6. It appeared that white would be able to hold, but there were far too many weaknesses to defend. Black won another pawn and then finished the game with a cute tactic. 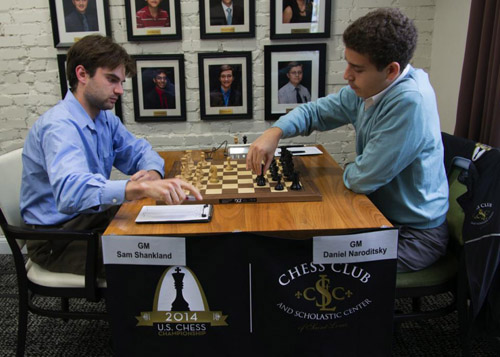 The youngest in the overall men’s field Naroditsky got another win today with a miniature over Shankland. Out of a King’s Indian, white played a type of Maroczy setup, but decided to launch an attack by flinging his pawns forward. It was soon evident that his aggressive left him with an overextended position and black finished nicely with 27…Rxd3 28. Qxd3 Nf2+ 29. Rxf2 Qc6+ with massive losses for white.

Ramirez also fell back with a lost to Friedel after a speculative opening involved two black knights for a white rook. There were some nice tactics in this position, but the knights turned out to be more resilient mopping up pawns. In fact, a white rook is entombed on h6 in the final position.

In the two draws Gareer-Onischuk had a long fight which ended in the Lucena Position draw. Erenburg-Molner was a battle of the players holding the last two places. The Be3 Najdorf turned out to be rather uneventful.

With four of the five games being decisive, the women’s field is blazing… and the last four rounds will the most exciting in recent history. Both pre-tournament favorites are where we thought they would be.

Back to the “Fire on Board” business in the women’s field with four of the five game reaching a decision. The game that was drawn was perhaps the most thrilling with co-leader Irina Krush being taken to task by Alisa Melekhina. Black played a Blumenfeld Counter Gambit and got good play. In fact, Krush was dismayed on how poorly she played the opening. She revealed that she had not been feeling well due to lack of sleep.

The game became tricky in the middlegame, but it appeared that white had parried black’s initiative and was completely winning. The commentators recommended 37.Qxc5, but Krush mentioned she feared having to allow 37…Nxf3+ 38.Kh1! In the end, when white dawdled, black had enough to force a draw by perpetual check.

Zatonskih beat Baginskaite after winning a piece and converting a R+N vs. R ending after a horrible blunder by her opponent in the time scramble. In yet another Guioco Piano, Abrahamyan-Foisor went into very familiar terrain, but black went astray during a tactical skirmish giving up the exchange, a queen for a rook.

Ashritha Eswaran, the early darling of the tournament, has fallen on hard time losing her second in a row to Sabina Foisor who slowly grown her down until she could convert her pawn advantage. In Zenyuk-Ni, black was routed and this result was never in doubt. Black’s position had as many holes as Swiss cheese and white controlled the board. It didn’t help that black got her knights tangled eventually losing one of them. 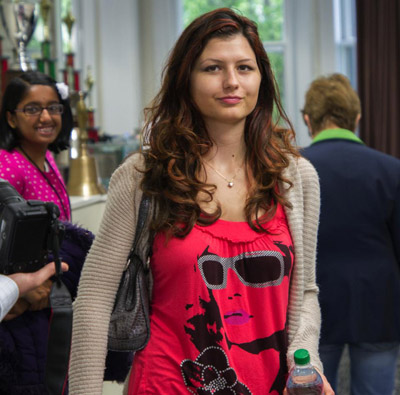