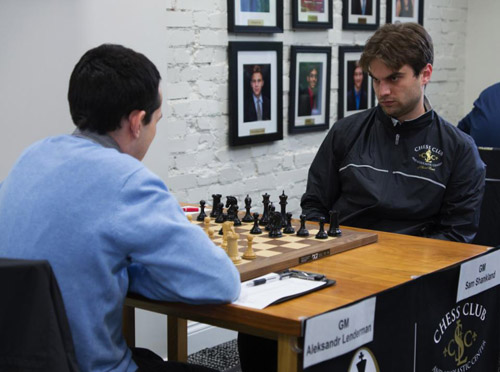 Shankland catching a glance at his nemesis.
Having a huge plus-score certainly helps his confidence.

Aleks Lenderman lost ground after losing to his nemesis in Sam Shankland. Shankland told commentator Maurice Ashley that he had a huge plus-score against Lenderman and went in very confident. In addition, he was able to catch Lenderman off guard, a fact that Lenderman confirmed in the post-game interview. Shankland nursed the pawn lead all the way until the endgame along with very active play. Ultimately, white decided to jettison another pawn to activate his rook, but this attempt was futile and Lenderman resigned.

Onsichuk-Kamsky had a very equal game throughout and nothing was made out of this conversation. Akobian-Ramirez had a long discussion in a Semi-Slav, a game that lasted 85 moves. The game was fairly balanced, but white had a slight edge in terms of space and his two bishops. Ramirez sacrificed an exchange for a pawn, but the compensation was rather dubious. 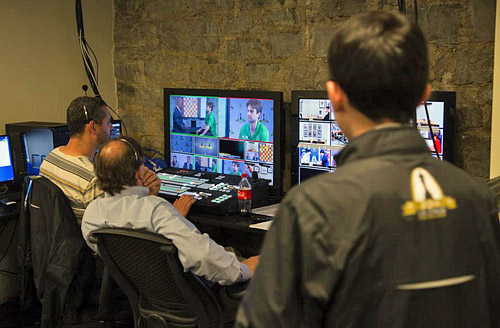 Bringing live action to millions!
Lenderman watches as he waits to be interviewed.

White kept prodding with his rook and while it appeared that black had a fortress the dominant white king would play a key role in breaking it. Ultimately black had to race toward the queenside to avoid being pushed into total passivity and losing his kingside pawns. However, white had it figured out and was able to use his king to stop the progress of the passed a-pawn white promoting his own f-pawn.

In Friedel-Gareev, black trotted out the “Hippopotamus” and this game went 25 moves before any material was exchanged. However, white was able to create a few weakness, most notably the queenside pawns. However, black had resources including 37…Bc6! which Friedel claimed his missed. The game went on and white decided that he needed to give up a pawn to get a winning endgame and he was able to do so with his technique.

Unlike previous rounds, the women had mostly draws with only Anna Zatonskih scoring the full point against Ashritha Eswaran. All the games were hard fought and it appeared that Alisa Melekhina would score against Camilla Baginskaite, but could not escape a perpetual check.

All the other games were hard fought and went into endings, but were drawn. Abrahamyan-Krush saw tense moments because Krush had fallen behind a bit as Abrahamyan had gotten two rooks on the seventh. However, she traded a pair of rooks and no longer had any winning chances with her extra pawn.

The race has heated up with Zatonskih pulling into a tie with Krush with 4/5. The two have yet to play each other, but will meet in the penultimate 8th round. Both will play Melekhina in the remaining rounds. Will we have yet another showdown?