With a rest day for the women, things are heating up in the in the open field with 4/6 decisive games. Lenderman powered to victory over Robson and bolted into first place on +3. Robson tried an exchange sacrifice out his Grunfeld, but got nothing for his investment. In fact, Lenderman grabbed the material and then launched an attack of his own. This culminated with the crushing blow with 29.Nxg6+! winning a pawn. In the ensuing complications, Lenderman gave back the exchange ending up two pawns. The game came to a beautiful finish with 50.Rg8+. Black resigned before 50…Nxg8 51.fxg8(Q)+ Kxg8 52. e7+ followed by 53.e8(Q). Nice! 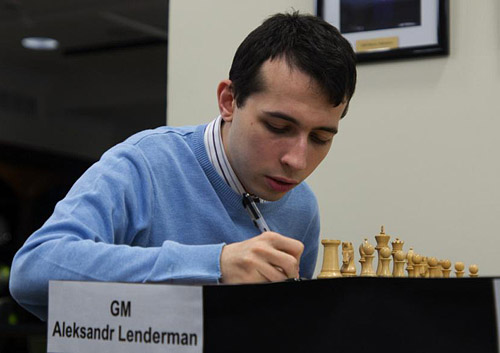 Lenderman is now the tournament leader!
Photo by Lennart Ootes.

Molner-Gareev saw a Schleimann Ruy Lopez, certainly a surprise since it is not seen at top levels. The Uzbek certainly understood the nuances better and was able to get a favorable ending with a closed position with two knights versus a knight and bishop. Classic example. However, the game dragged on before Molner committed a one-move blunder after 68.Kg3 Nxc3+. After three draws, Kamsky crushed Erenburg in a Trompowsky Attack.

“I decided on (Trompowsky) probably a half an hour before the game,” Kamsky said. “I looked at some lines and realized there’s nothing much going on – but its middlegame position, you can exchange a lot of pieces, so there’s a lot of play.”

Certainly he understood the nuances, but launched a scintillating queenside(!) attack by prying open lines. The game ended with Kamsky “two-rooking” black’s king. Actually after 34.Rc7 there are all types of mating patterns in the air if the queen moves off the rank. In Onischuk-Shankland got a huge advantage and commentators were swooning over the overwhelming advantage. However, they were then wondering whether he had given away his advantage after 29.e6 instead of the suggested 29.f4. Of course, Onischuk had everything under control.

“I think (Shankland’s) opening choice to go for this endgame was mistaken,” Onischuck said. “He can either draw or lose, but he has no chances to win. It’s a very comfortable position for me – maybe not much, but I’m bracing just a little bit. And in fact, he made a mistake with his bishop and maybe h6 is just losing.”

Indeed. Onsichuk got his first win and is a point out of the lead. In other action Akobian-Friedel (Bogo-Indian) and Naroditsky-Ramirez (French) were drawn.