What an exciting day at the U.S. Championships! There were some exciting encounters, particularly in the Women’s field.

In the main championship, three decisive games were seen as the fighting vigor has picked up steam. Shankland-Kamsky and Friedel-Onischuk were nothing special while Erenburg-Lenderman drew in an exciting Sicilian Richter-Rauzer. Akobian was able to squeeze a win in a rook ending after Gareev made a terrible misjudgement.

Ramirez got the win in a funny conclusion. The black king has marched up the board to aid in raiding the kingside only to be entombed by his own pieces. However, 43…Kh3 resulted in an amusing finish after 44.a4 Qg4 45.Qc5 Bf4 46.Qf2! After 46…Bg3, Molner resigned before allowing Ramirez to play 47.Ng1 checkmate!

Robson has fallen on hard times with his second loss in a row after he played a novelty in the Berlin Defense 6.Ba4. White appeared to get adequate play as he controlled the e-file. However, as time wore on the marauding white rook actually got caught in a net. Instead of losing a rook, white decided to donate the knight instead, but the result was clear. Even Robson’s attempt at a “crazy rook” was nothing but a humorous self-deprecation.

Now the light squares are indefensible. Krush who claimed not to be a good attacking player, sacrificed a rook with 21.Qh5! Qxd7 22.Qf7+ Kh8 23.Bxf6! and it’s done. The commentators were discussing which mates are the most aesthetically-pleasing. Of course the “smothered mate” is a favorite of many and this was demonstrated with gusto. Seirawan even shared a story of learning the smothered mate (with the queen sacrifice) as a boy. Certainly not a joking matter for black, but Krush seemed to revel is the opportunity to get such a rare finish. Yasser Seirawan seemed appalled as the sadistic idea that both Krush and Jennifer Shahade would prolong mate one move because of the aesthetic beauty. Quite hostile or maybe “Hostel“. 🙂

Viktorija Ni blew a great opportunity to get her first win against Anna Zatonskih after winning the opening battle with active play. Black simply stole a pawn with 13.Rxd5 and later won a queen for two pieces, but was unable to create more weaknesses before white set up a fortress. 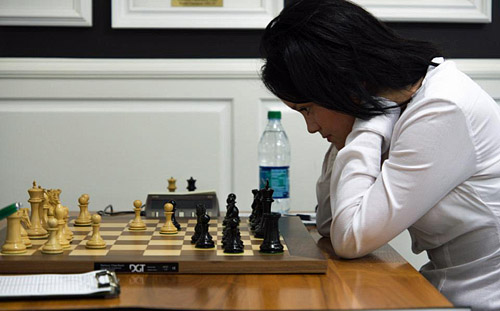 A near-miss for Viktorija Ni who had Anna Zatonskih busted.
Photos by Lennart Ootes.

Ashritha Eswaran missed another opportunity after getting a big advantage against Alisa Melekhina’s Grand Prix Attack. The junior player shredded white’s plan and after 17…b5 was completely winning. However, black got a bit overzealous, grabbed the weak d3-pawn, but allowed white to liquidate into a rook ending. Rook endings are the most common in chess and many of them are drawn… even cases when there is a two pawn deficit.

Instead of bringing her king over to the queenside and free the rook, Eswaran tried to push the pawns and allowed white to attack the kingside pawns. Despite the advanced passed pawn, black could not advance without preventing white from gaining an unstoppable passed pawn. Disappointing for Eswaran, but the result is not a bad one, but a win would have put her into clear 2nd.