Things will get rough and tumble in the coming rounds, but for now the U.S. Championship has been a very close tournament with no player claiming a distinct superiority. In the women’s field, Ashritha Eswaran scored another victory over a beleaguered Camilla Baginskaite in a marathon. More on that later.

Ray Robson was able to hold Gata Kamsky in a rather placid Berlin Defense. Alex Lenderman broke into the lead with a win over Alex Ramirez after white got lost in the complications and went down material. Lenderman converted smoothly. In Akobian-Onischuk, there wasn’t much of a conversation and after 22 moves, they shook hands.

In Gareev-Naroditsky, the young phenom fell under serious positional pressure in a King’s Indian, Averbakh variation. White got in a kingside pawn storm and black’s position was in a shambles. It was white’s outside passed pawn and attacking king that would do him in.

“Positionally, my situation was looking really good,” Gareev said. “His bishop was stuck, I had more space, my structure was better, my pawns were placed on better colors, my pieces were more active… I was just trying to reduce the uncertainty at that point, and for awhile Daniel was trying to push forward and complicate things. Eventually he just ran out of resources, and we got to the endgame, which was a big advantage for me.”

Erenburg-Shankland was an interesting conversation that did not yield much in the way of novelties, but a tough fight nevertheless. Friedel-Molner had a look of dynamism with so many imbalances when in fact, the game petered out rather quickly at move 35. Wins have been hard to come by with only four decisive games thus far. 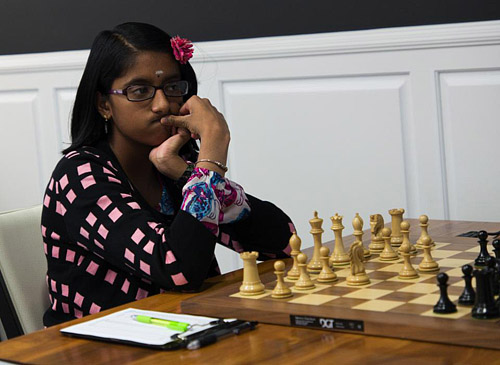 Eswarana seems confident. Her confidence would pay off again.

With four decisive games, the talk of the round (again) was Eswaran’s victory. This time it was Baginskaite’s scalp that would be claimed. This was a strange game in that white did not play the usual 9.Be3, but opted for the strange 9.Re1 and 10.Bf3 setup. This leaves the c4-square vulnerable and white does not have the usual play with f4. Thus, black was able to equalize the position rather easily.

After 22…f5, black was looking very solid, but white had a passed a-pawn. Dynamic equality was on the board. Black continued to play reasonable moves, but then she begin to unravel after white lashed out with 29.g4. Baginskaite, who won the Lithuanian championship at the age of 15, missed a good change with 29…Rxc4! 30.bxc4 b3 with a strong initiative.

Instead she played passively and her exposed king soon became an issue. Not only that… white’s passed a-pawn would become a serious trump. White actually won a pawn but the youngster began making a series of mistakes by chasing the black king to a more advantageous position. It was at a certain point that a pawn race ensued and both queens looked on as the pawns sprinted up the board for a queen.

Two buddies faced each other in Zenyuk-Krush and although the game was certainly not a pre-arranged draw, the game had no violent tendencies. One of the challengers of the Krush-Zatonskih dominion is Tatev Abrahamyan, their teammate on the U.S. Olympiad team. Tatev has improved since the last year and has recently earned the IM title. In this game, she nursed an a-pawn and cashed it in for the full point on move 47.

In Ni-Melekhina, the game was practically a rout as Ni has not had much success in the last two women’s championships. She did not come to fight in this game as Melekhina quickly seized the center as Ni played 1. Nf3 c5 2. g3 Nc6 3. Bg2 g6 4. b3 Bg7 5. c3?! e5 6. e4. Black was able to develop an overwhelming position and in desperation Ni sacrificed a piece with 23.Nxe5? White had a mass of central pawns, but they had no momentum. Ni kept trying to complicate the position with tactics, but she kept losing material until Melekhina had netted a queen for a bishop. Clearly an easy game for the UPenn law graduate.

Anna Zatonskih had a rather easy time against Sabina Foisor after white overlooked a tactical shot, 12. e4 Qxc3+ 13. Qxc3 Nxc3 14. Rxc3 cxd4 netting a pawn. Black got a very nice pawn chain and was in control.

“My position was very easy – I don’t mean like easy to win, but easy to find moves to play,” Zatonskih said. “It was concrete lines and with a 30 second increment in such a position, it should be enough. I think white needs time in such a position to prove she had compensation for the pawn. For black, it was pretty particular what black was supposed to do.”

Zatonskih is tied with Krush after three rounds.