An innovative radio program is taking a look at broadcasting chess over the radio. No… it’s not going to require any blindfold skills, but BBC Radio is experimenting with a series of interviews of personalities in their “Across the Board” series. Dominic Lawson, chess aficionado will interview the personalities during the one-hour game, but the broadcast will only last 15 minutes. Lennox Lewis, a well-known chess enthusiast, will be one of the subjects as well as women’s World Champion Hou Yifan. 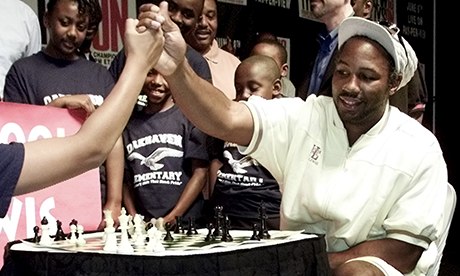 Lennox Lewis will be featured on BBC’s ‘Across the Board’.

During the London Chess Classic, Malcolm Pein tried an interesting format of tandem chess played with the IM Lawrence Trent providing entertaining commentary. The format was a hit, but chess without a visual may be quite a challenge. Thus, the program will count more on star power to attract listeners. The show’s producer, David Edmonds opined, “If we can get Test match cricket to work on the radio, then we can get chess to work as well.”

The problem was always going to be the chess players being very competitive, they wanted to win and focus on the chess, rather than responding to the questions. I had to try to persuade them that while the chess was important, it was secondary to the conversation.

Chess is still seeking for the formula for marketability in various media formats. Online chess has boomed amongst the chess community, but for the non-chess public, chess remains in obscurity. Perhaps “Across the Board” will be another attempt in a long and vigorous debate.