Draughts is probably a board sport that does not get much recognition for being a high-level game. However there is intricate beauty despite its simplicity of pieces and moves on the 10×10 board. The geometric patterns and the lightening combinations at the professional level would give one pause to compare it to the game we played as a child. 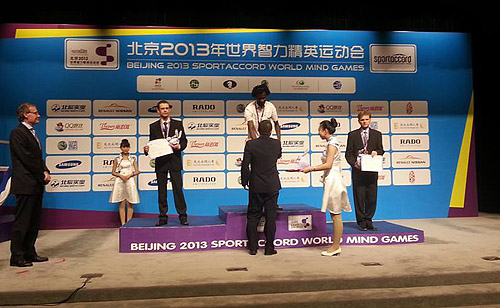 A couple of years ago N’Cho Joel Atse became the African champion and was an unheralded player from Ivory Coast. He recently won the blitz competition at the 2013 World Mind Sports Games (WMSG) and is the first player from his country to score such a victory. Earlier this year after winning the African Championship, Atse qualified for the World Draughts championship in Ufa, Russia and placed in eighth place.

African players are definitely making an impact in draughts with star players such as Cameroonians Flaubert Ndonzi (rated 13th in the world) and Jean-Marc Ndjofang (17th in the world, 2nd in 2013 World Championship and bronze medalist in WMSG) and Senegalese players Macadou N’Diaye (19th in the world) and N’Diaga Samb (30th). Samb, once rated as high as #11, became famous for challenging computer programs. Francophone West Africa is still the powerhouse region of the continent which contrasts to chess where Anglophone countries are stronger.

The tradition of draughts stretches far back in Moorish Africa.

Africa has many Grandmasters and of course Baba Sy of Senegal was once World Champion. The question remains that while African players are very strong in draughts, they struggle to make an impact in chess. One may say there is a precedent since African “chase games” have always been popular. There are many stories of African players playing in foreign places and stunning unsuspecting competitors. Atse appears to the be the latest and he primarily emerged from obscurity to become the blitz king at the World Mind Sport Games!

Lennox Lewis back at Chess!