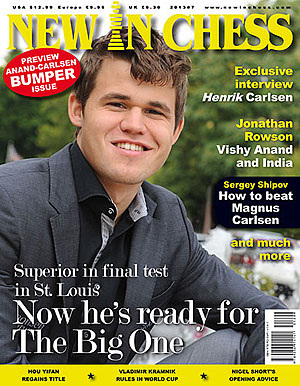 There has been great anticipation of the World Championship match starting in a few days in Chennai, India. Of course New in Chess will be on the scene covering the action. The new issue laid out a very useful statistical guide showing the head-to-head count between Viswanathan Anand and Magnus Carlsen. It includes such details as accolades, record against past World Champions, number of Olympiads, major tournament victories and of course every conceivable stat of their personal encounters.

This table also shows Anand’s brilliance over the years and also refutes Carlsen’s attempt to trivialize Anand’s legend by saying he is only holding onto to his title. Anand has won 104 tournaments and matches in his career to Carlsen’s 32. As brilliant as Carlsen has been, he will be hard-pressed to catch Anand’s record.

Incidentally, this is the first championship match without a member of the former Soviet bloc since 1921. It will turn over a new leaf in chess in a number of ways. The dominance of Soviet/Russian chess officially died a few years ago despite the abundance of strong players. There is a lot of diversity in the top 20 players. It is also a battle of generations of disparate chess nations… a thriving one of 1.2 billion and a rather small one with five million and only handful of chess Grandmasters. 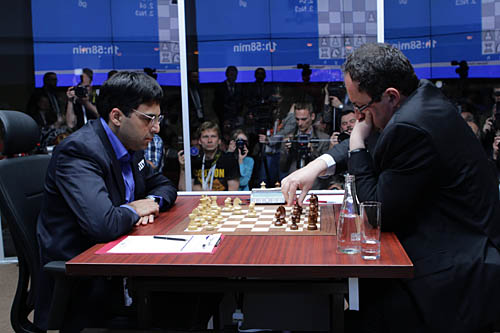 Sergey Shipov penned, “How to beat Magnus Carlsen” and details an analysis of Carlsen’s losses. However, he fails in that he does not mention debacles such as Sergei Sjugirov (in 20 moves) and Michael Adams (where he played an eccentric opening) games he lost trivially. There are several other games where he has shown his vulnerability. However, his three recommendations for Anand are interesting… especially the last.

Vishy must believe in victory. In any position, in any competitive situation. He must not crack or lose heart. However, difficult things are. Only in this case will there be a chance. So that possibly the World Champion’s best assistant will be a yogi. A spiritual mentor. A sensei.

It appears that Anand has developed a high regard for Carlsen, but he will have a decided advantage in match experience. Perhaps there should be an article on how Carlsen can beat Anand! Team Carlsen is doing all they can to ensure the best chance as they have even negotiated a clause that would award time for postponement in case of illness.

Carlsen’s tune-up for the championship match was the Sinquefield Cup where he won ahead of Hikaru Nakamura by one point. The event was spectacular in its presentation as well as the competitive spirit in the tournament. Dirk Jan ten Geuzendam was on hand to cover the event and gives a vivid description of the venue and the emotions and passions conveyed by the observers… including a neurosurgeon who not only took a week off of his practice but drove from Mississippi! 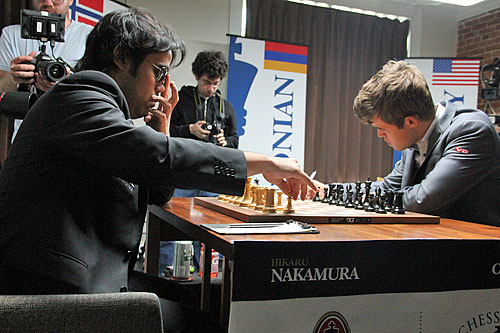 There were several annotated games from the event… all thrilling battles. Also included in this issue is a candid interview with Henrik Carlsen who was also present at the Sinquefield Cup. He gave a very entertaining explanation of Magnus’ rise from humble beginnings of a novice. Of course, it has always been known that Magnus lives a balanced life of sport and fitness and this routine has never failed. Throughout the interview were many topics allowing the reader to gaze into the private thoughts of a chess parent… and a parent of a child celebrity. Not easy. 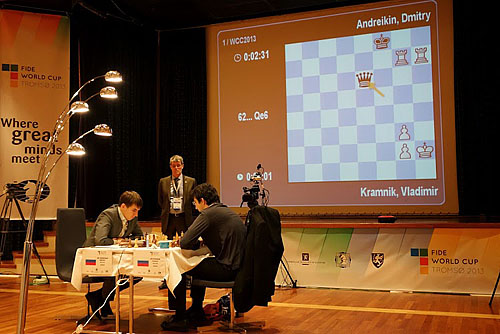 Kramnik finishes off Andreikin to claim the World Cup.
Photo by Paul Truong.

The World Cup tournament was also an exciting affair and Vladimir Kramnik’s win was not as surprising as some other breakout performances. Dmitri Andreikin, Evgeny Tomashevsky, Maxime Vachier-Lagrave, Julio Granda Zuniga and Wei Yi all had notable results and were featured in the article.

Since I have gone far too long… I will leave with comments about the Women’s World Championship in Taizhou, China. This match did not get much publicity and many already felt it was a formality for Hou Yifan to regain her title. However, after Anna Ushenina’s performance against Peter Svidler in the aforementioned World Cup, many had second thoughts.

Concurrently, there were rumblings from the Ushenina camp that she was unhappy with the arrangements including the food choices. This was apparent from her pursed lips and very stoic expressions throughout. Jan Timman wrote about these issues and what turned out to be a disappointing 5½-1½ crush in favor of Hou Yifan. 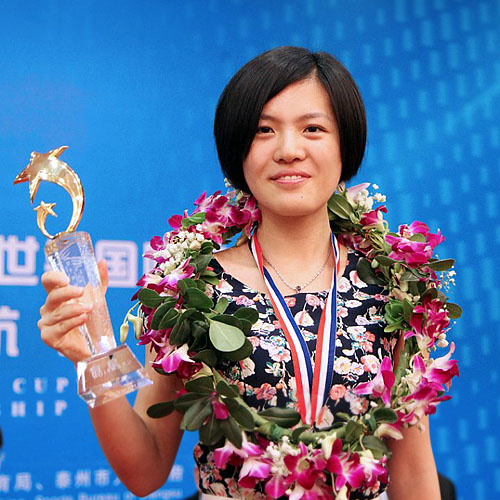