Michael Jordan is perhaps one of the world’s most recognized sports names even long after he has retired. He has been viewed as the best competitive basketball player ever to play the game. Of course arguments can be made for Wilt Chamberlain, Bill Russell, Elgin Baylor, Larry Bird and Magic Johnson, but there is one player that seems to be on everyone’s top five list… Michael Jordan.

Recently Ahmad Rashad sat down with his longtime friend and conducted a 45-minute interview about his career, team chemistry, rivaliries, personal challenges, retirements and even the “Dream Team”.

One thing that sticks out in the interview is Jordan’s candor and his credibility. Certainly winning six NBA championships in six attempts helps one’s credibility, but to reveal some of the inner workings of the mind in such a great career can be applied to so many different scenarios. 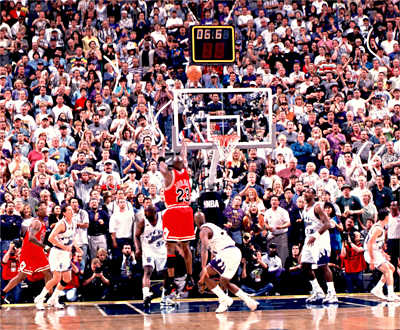 Michael Jordan hit this game-winner to win his sixth championship in six tries. In his interview, he makes very surprising admissions about his second retirement after this epic storybook ending.

Of course chessplayers only have themselves to rely on, but FM Warren Elliott posted this video on a Jamaican Facebook page and said, “You could learn a lot from that guy.” Anyone at the top of his field must have a wealth of knowledge. If we look at the intensity of Garry Kasparov, Serena Williams or Usain Bolt, we will see talent and execution meet opportunity… making a champion.

As Mark Bowen’s popular article on lateral thinking, many of these lessons are transferable and applicable to other sports. In the following interview, we can take away many valuable nuggets of wisdom of determination, competitiveness and discipline.

All of these attributes champions possess. If there is anyone who can tell us about championship, it is Jordan. This interview is 46 minutes and shows authentic footage and behind-the-scenes dynamics of a great competitor. Take a listen to this exclusive interview.