The 2013 U.S. Cadet Championship will begin today with eight of the top juniors under the age of 16. The tournament will take place July 20th-22nd at the Rockville Hilton in Baltimore, Maryland. Defending champion Michael Bodek is not eligible and has picked up IM norms since the Cadets.

The players are vying for a four-year college scholarship offered by the University of Maryland-Baltimore County (UMBC). The winner will receive the full ride. The top three players will receive free entry into the Washington International which begin August 5th. The entire field is as follows: 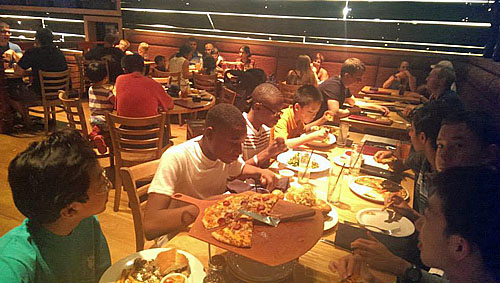 The Cadets have a pre-tournament meal together. Good times!
All photos in the reports are courtesy of Maryland Chess Association.