Justus Williams has come a long from being the soft-spoken boy with the long dreadlock mane. The last five years have been a whirlwind for the 15-year old from the Bronx, New York. He is now a slender, clean-cut, bespectacled high school sophomore at Bronx School of Science and Technology who has already traveled to several countries and has even starred in the documentary “Brooklyn Castle“. 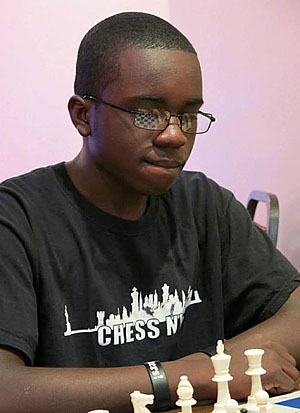 Williams draws inspiration from a number of figures including GM Maurice Ashley and Lebron James, both champions with interesting stories. While Justus has not met Lebron James yet, he has rubbed shoulders with celebrities in Hollywood who were inspired by his OWN story! However, Justus seems to be very mellow about all that he has experienced. The determination that boils inside of him is disguised by his demeanor which makes makes him quite an enigmatic figure.

Justus has tasted national fame, but the accolades keep coming. Today, Justus won the U.S. Cadet Championship, a tournament featuring the top eight players under 16 years of age. Amongst the eight master-level players, he showed the most poise in his demeanor and in his play despite losing his first-round game to eventual co-champion Michael Brown of California. 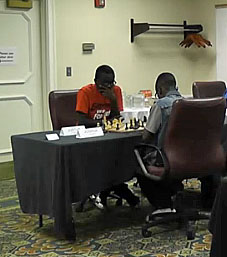 Justus Williams vs. Josh Colas
in last-round battle. Justus prevailed.
After three consecutive draws, he won his last three games including a win over his friend and fellow scholastic star Josh Colas. Ironically, he would be tied with Brown on 4.5/6 and the two would play a tiebreaker with a college scholarship at stake.

In this finale’, Justus was able to apply just enough pressure with black and his opponent ultimately collapsed in a heap. With this victory, he would win a scholarship to the University of Maryland at Baltimore (UMBC). Brown would be declared co-champion and earn a free entry to Washington International along with Justus and Ruifeng Li.

With his photogenic smile and growing resume’, he is certain to get more college offers and travel opportunities. However he would also like to see how far he can go in chess. His mother Latisha Ballard-Williams has always had the confidence in what chess could do for her son. She is like many chess parents who realize that chess is more than a leisure activity, but a path for realizing one’s hidden potential. Justus is becoming a case study before our eyes.

A nice game from the Cadets…