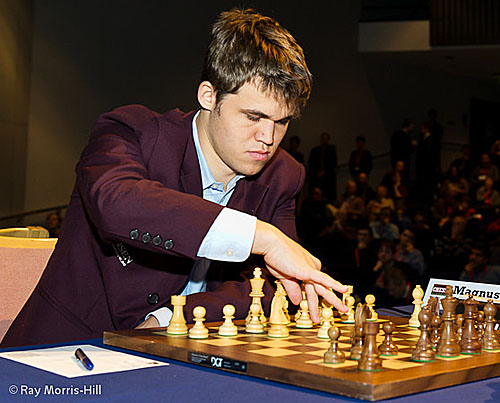 Magnus Carlsen broke the all-time rating record of Garry Kasparov. He now tips the scales on the live chart at 2861. Photo by Ray Morris-Hill.

The well-anticipated rating list has been released and atop the chart is Magnus Carlsen at 2861, a new record has been birthed. After a sterling performance at the London Chess Classic to close out the year, Carlsen will be going into the Grand Prix with the idea of accomplishing his next goal… a World Championship shot. However, there will be many other vying for this shot as well. Vladimir Kramnik (2810, +15) is in good form and surpassed Levon Aronian (2802, -13) who has had mediocre results as of late.

Teimour Radjabov (2793) played in the World Mind Sport Games, but showed no movement. Perhaps he is settling into his new marriage. Fabiano Caruana (2781, -1) is steady and will be on hand for the upcoming Tata Steel tournament. His invitation (and acceptance) to play in the U.S. Championship has caused quite a stir in the chess world. The prospects of Caruana and Hikaru Nakamura (2769, +9) teaming up one day would be quite a boon to American chess. Sergey Karjakin won a gold medal at the Mind Sport Games in blitz, but his impressive showing at the FIDE Grand Prix netted him five points (2780, +5). World Champion Viswanathan Anand (2772, -3) recently made a declaration to play with more energy this year. This is a good sign since the Indian maestro continues to plummet on the ELO ladder. While still a respectable 7th, he wins few games and even fewer tournaments these days. His next World Championship opponent (whomever it is) will certainly put him to the test.

Veselin Topalov (2771) is a non-factor these days, but it still a strong player. Nakamura had vaulted back into the top ten after a rough patch. He will go into Tata on a good note after winning three silver medals at the Mind Sport Games (rapid, blitz, blindfold). Shakhriyar Mamedyarov (2766, +2) also did well at the Mind Sport Games in Beijing with two bronze medals (blitz and blindfold).

At the top of the women’s list is Judit Polgar (2696, -9) of course. She did not play well in the London Classic, but still has a nearly 100-point lead over Hou Yifan (2603, -3). Hou won a gold medal at the Mind Sport Games in blindfold and will be competing in the Tata Steel “A” group. This will be an important tournament for her to show how she does in such a tough field. This may be her toughest test yet. Now at 17 and at 2600 mark for two years, the question of whether she is still improving is becoming more common. After losing her World Title in the recent Women’s Chess Championship knockout she will have a chance for redemption against the 24th-ranked woman in Anna Ushenina (2477, +25). Ushenina beat Antoaneta Stefanova (2516, +25) to win the women’s title. Hou Yifan was unseated by Monika Socko (2445) of Poland. Hou-Ushenina meet later this year.

In other business, Humpy Koneru (2597, -13) has regained some form after faltering in the Women’s Chess Championship. She won a bronze in rapid at the Mind Sport Games, but she has many questions to answer about a reasonable path to the world crown. Anna Muzychuk (2582, -4) has dipped a bit after reaching 2600, but looks to have a good year in 2013. There are no sensations in the women’s list, but Dronavali Harika (2514, +2) is inching toward the top ten after some credible results lately.

In the junior’s group, Anish Giri (2720) is holding while Yu Yangyi (2688, +7) and Wesley So (2682) are in tow. Sanan Sjugirov (2643, +19) has shown recent improvement and is finally realizing the talent that Kirsan Ilyumzhinov saw in him as a protege. He won a strong tournament in Barcelona picking on a cache of 19 points. Parimarjan Negi (2641, +3)remain in the top five, but has not seen his rating increase much in the past three years.

Finally on the girls’ list, Hou Yifan is still on top and has a few more years of eligibility. Deysi Cori (2434, -4) is a distant 2nd, while Guo Qi (2431) and 14-year old Aleksandra Goryachkina (2402, +5) are the rising stars. Goryachkina will be playing in Tata Steel “C” as a replacement for Saleh Saleh (UAE). Picking her instead of another GM is a surprise, but it will of course be a story.