Bringing out the Best in Maryland

THE BEST OF TWO TITLES

When talking about black chess players in Baltimore City, you often hear about the Baltimore chess legends such as Charles Covington and William Morrison…

Not since the Scholastic Chess Dominance of such great ones like Nathan Wilson, Troy Williams, Kimani A. Stancil and Antoine Hutchinson has there ever been such a buzz in the air for Scholastic Chess in Baltimore City brought on by 13-year old Ronald Best, Jr.

Under the guidance of his father and coach Mr. Julius A. Wade Jr., Ronald has been winning countless awards and tournaments in Maryland. Recently, Ronald captured the title of “Maryland Middle School State INDIVIDUAL Chess Champion”.

This title has been elusive from Baltimore Scholastic players for over two decades! Along with this title, Ronald led his school to win the ” Maryland MIDDLE SCHOOL State Chess Championship”. Winning two titles in one weekend was a great accomplishment for Ronald.

In the midst of all the Inner City distractions that many Baltimore teens face, Ronald has maintained focus and continues to inspire many Baltimore Scholastic Chess players with his chess skill. No matter what Baltimore public school you visit, if there is a chess program there, Ronald’s game play is mentioned. Ronald can be seen in a short documentary filmed by the Baltimore Educational Channel 77, describing some of his accomplishments. 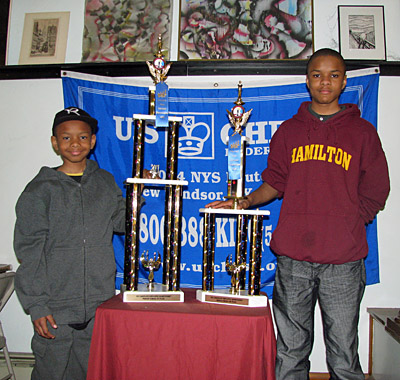 Ronald sharpens his chess skills at the Fells Point Chess Club where he is being mentored by the club’s proprietor, Senior Tournament Director, Wilbert Brown. His current rating is 1850. Some people say that Ronald’s actual rating hasn’t caught up with him as of yet. But, when you ask him, “what is your rating?”, He simply replies, “ratings don’t matter”.

Ronald desires to be a doctor as well as a grandmaster in chess.

28 Responses to “Bringing out the Best in Maryland”