Jose Espinosa is a familiar face at the World Open chess tournaments every year. You will see him milling about the skittles area and usually chatting with another player. A native of Brooklyn, New York, his rich baritone voice is a complement to his usually friendly demeanor. However, there is a lot more to Espinosa than one could imagine. One may not know that during a lengthy career in financial services, he played bit parts in movies with actresses such as Glenn Close and Mariska Hargitay. 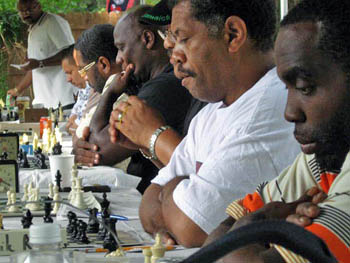 José Espinosa (wearing a cap) in a 2007 match
between Philadelphia and Baltimore.

While it seems Espinosa was riding high, the world would soon come crashing down around him. The company that Espinosa worked for had taken on new ownership and in the restructuring, he was laid off. Unable to meet his bills, he lost his New York home. At that time, he was taking care of his ill mother in Philadelphia. He ended up moving there, but when his mother passed away in 2005, that house was lost as well. He suddenly found himself homeless. 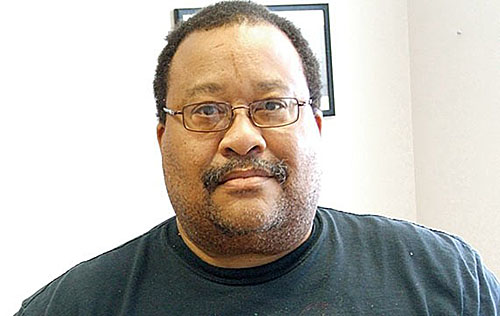 “I went from having two places to live to no place to live. There were times I thought it was over. You’re in the shelter. Things happen to you and you ask yourself, ‘Why me?’ I was shocked.”

Espinosa had been homeless since 2005, but at the shelter in which he was residing, they had begun a newspaper project. Espinosa signed up and began doing brief articles while he continued to look for a break. He approached Matthew Saad Muhammad, the light-heavyweight boxing champion of the world from 1977 to 1980, who he felt had a gripping story. Muhammad had be a resident at the shelter since 2010. He agreed to share his story with Espinosa.

The article was aptly called, “Fighting Back”. It wasn’t an easy task. “Here’s a man who was on top and now he’s on the bottom, so his trustworthiness of people was on the lowest end,” remarked Espinosa. Such a distance from the subject may have contributed to the objectivity of the article. The article appeared in One Step Away is a member of the INSP, which supports 112 street papers in 40 countries, published in 18 languages and reaching 6 million readers worldwide. We all may have seen homeless men peddling these papers in the major cities. Many have been able to earn living through selling INSP papers.

The article caught the attention of the judges at the International Network of Street Papers (INSP) conference in Glasgow, Scotland. When told he had won the award, Espinosa was surpised. “I was floored. I was shocked that the story did have legs and it took off. I am honored.”

Such a turn of fortune was welcomed by the 58-year old Espinosa. However, he is still looking for employment and to leave his homeless history behind. “I hope to get a new lease on life. It might inspire someone else to do something, to show you it’s not too late in life. Don’t give up hope.” His subject Muhammad has moved onto better things and Espinosa played a big role in this. Hopefully, fortune will soon shine on him.