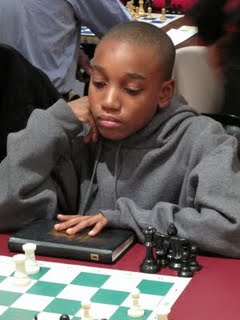 There is an excellent article in the New York Times online by Dylan McClain. It is perhaps the most candid article written about James Black, Jr. who is on the verge of earning his Master’s title in chess. The article is not about chess as much as it is a story of Black’s triumph over some serious family issues.

What is evident in the article is that chess surrounds the young scholastic star and has done a lot to keep him focused. James plays at IS-318, a perennial chess powerhouse, and has assembled quite a collection of trophies in his family’s neat home in Bedford-Stuyvesant, Brooklyn.

The article is a testament of the good qualities that can be earned when one is focused on a well-defined goal. Black’s accomplished come with a sense of irony in that his older siblings have all had tremendous difficulties with two half-brothers serving prison sentences. While this has affected him, he presses on. Black has won three national titles and at only 12, he has a bright future.

Read Dylan McClain’s, “One Move Ahead of Opponents, and Two Ahead of Trouble,” New York Times, 28 June 2011.