After a three-month layoff of chess, Hikaru Nakamura felt the rust. He sat out the U.S. Championship, but decided he would participate in an exhibition match against Ruslan Ponomariov of the Ukraine. Nakamura, the world’s #8 lost the first game, but rebounded in the second with a win. After three draws, he closed the match with a dramatic win. 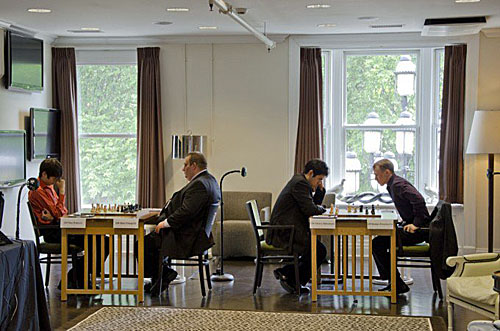 Robson vs. Finegold and Nakamura vs. Ponomariov
Photo courtesy of CCSCSL.

Nakamura then showed why he remains one of the most feared players in fast time controls. He clearly dominated Ponomariov in the rapid winning 3-1 for a 6½- 3½ victory. Ray Robson, the young talent from Florida, outplayed Benjamin Finegold in the six classical games winning 4-2 and then splitting the four rapid games for a 6-4 count.

The match has an interesting twist as Ken West reports that a tornado warning forced the four players into the basement on a couple of occassions. For those unfamiliar, the U.S. has been hit with a barrage of devastating tornadoes in the south and midwest regions.

Ponomariov seemed to be grateful for the opportunity and Hikaru had told The Chess Drum that his opponent was better prepared. He even quipped after his first loss that the three-month layoff took a toll. However, he found his stride and after the match began cheering on his beloved Vancouver Canucks.