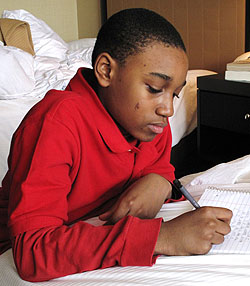 As James Black, Jr. climbs the rating ladder, he is finding that earning the last 100 points is the toughest. Black has been as high as 2174 (now 2155) and is now making a push to earn the coveted Master’s title. He will be the most recent of the “Big Three” to earn the ranking. Justus Williams and Josh Colas are the other two 12-year old African-American Masters.

The 12-year old is a regular at the Marshall Chess Club where he puts his skills on display along with wily veterans and other young stars. He won the K6 national individual championship in 2009 and is particularly adept at blitz having won scholastic national championships in this format.

Currently, Black attends IS 318 and if you meet him, you will be drawn to his affable and humorous spirit. However, he is also a dangerous opponent and he may be trolling the open sections at major tournaments this summer.