Since becoming one of the youngest Grandmasters in history (14 years, 6 months), the chess community knew that good things were to come for the diminutive girl from China. GM Hou Yifan, 16, would compete for the Women’s World Championship in 2008 losing to GM Alexandra Kosteniuk in the finals, but most knew that her claiming the title would be a matter of time. She would spend more time playing strong competition abroad such as 2009 Corus, 2010 Moscow Open and 2010 Aeroflot. In 2010, she lead her team to gold medal in the Asian Games and a silver medal at the Chess Olympiad.

Finally, the Women’s Championship would commence on Antakya, Turkey. Hou started smoothly, but her battle with former women’s champion GM Zhu Chen went to tiebreaks. The two traded wins in the classical before Hou won the tiebreaks. Hou then beat Grandmasters Kateryna Lahno of the Ukraine and Koneru Humpy of India to get to the final. There she would face a battle-tested Ruan Lufei of China, a women’s Grandmaster.

Ruan had beaten GM Alexandra Kosteniuk and survived five tiebreaks! The battle would be tough. In thrilling fashion Ruan Lufei staved off elimination to win Game Four and force tiebreaks. In these games Hou seemed to have a stronger will and won convincingly 3-1. 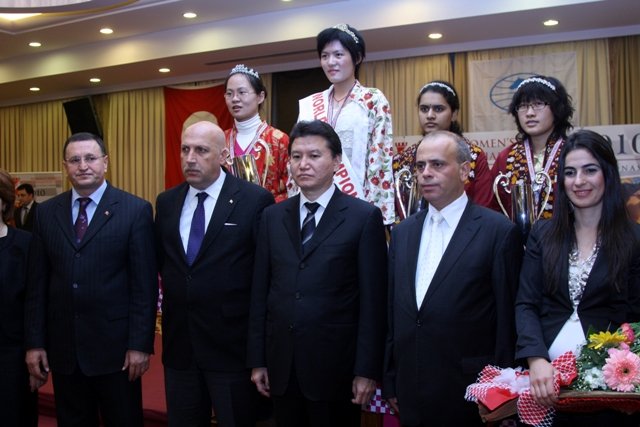 This is the fourth world championship for China with GM Xie Jun, GM Zhu Chen, GM Xu Yuhua preceding Hou. China has been dominant in women’s chess for 20 years with ten medals in last eleven Olympiad (four gold, two silver and four bronze). Hou Yifan will be the cornerstone for future success. Perhaps people are now wondering if she can ever challenge the records of Hungary’s GM Judit Polgar, the strongest women’s player ever. Time will tell.