The Road to Olympiad… from Nairobi to Siberia

Kenya has a budding chess community and recently finished its Olympiad qualifying tournament. Thus, they have named the team that will travel to the Olympiad in Khanty Mansiysk, Siberia. Mehul Gohil writes an intriguing account of the qualifiers and sends a collection of very captivating photos. Enjoy!

THE ROAD TO SIBERIA
By Mehul Gohil

Not many people in the world know of John Mukabi. That kind of name is easier to pronounce then the hard to chew on “Khanty Mansiysk” but it wouldn’t ring a bell or invoke the nostalgia of an old masterpiece…surely it cannot be the Alekhine – Mukabi 1-0 boilover (Bad Pistiyan 1937, Queen’s Gambit Declined, Orthodox Defense) as annotated by Harry Golombek? That’s fiction.

But it doesn’t matter. John Mukabi or “The Beast”, as he is more affectionately called in Kenyan chess circles, made the last moves of the Kenya National Olympiad Qualifier on a dramatic first February 2010 weekend and booked his ticket to Siberia and to what will be his seventh Olympiad appearance.

Kenyan chessers love their Olympiad. It’s everything. It’s the fight, it’s the mad scramble on the preliminaries, it’s the blood war with chess friends over the board, it’s the phone calls to relatives “I’ve made it into the team!”; or it’s the drowning of yourself in sorrow amidst the many bottles of Tusker after you have suicide-bombed your winning position. The after game “Donner” kebabs and nyama choma fail to digest, misery abounds in the developing constipation, and everything becomes “…the hell of hells…Gehenna…The vale of Kai Hinnom”. 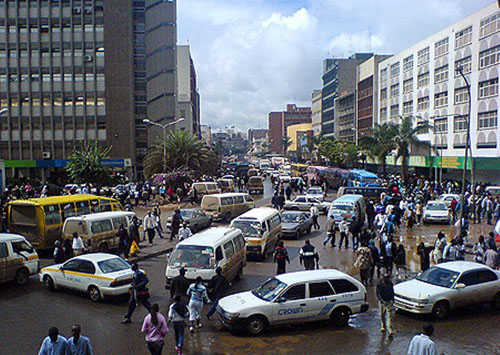 Tom Mboya Street, the busiest in Nairobi. Also the neighborhood of a chess hot spot.

Many around the world would not understand reasons for such strong passion and madness. After all, here is a Kenya that lacks ELO pedigree, its chessmen do not pawn storm international events, the Giuoco Piano is weaker this side of the Indian Ocean than it is on the Vishy washy Chennai shores. But every two years comes along an opportunity to go on pilgrimage – Olympiad. This is the Chess Haj where a forgotten chess world pays homage to the familiar one – as Viswanthan Anand stares into the complex depths of the Olympiad hall, looking back at him from the far and lost aisles will be Kenyan variations.

It was a responsibility to keep the legacy of Kanani, Andolo, Nguku and the other Kenyan Olympian giants who went before us alive.

Indeed, Caissa’s chosen ones – the Carlsen, the So, the Giri, the Nakamura and et al – sometimes forget or are unaware about the exact proportions of their fame – they have a worldwide fan club, right down to Nairobi’s chess hotspots: Sandton Palace in the Tom Mboya Street neighbourhood, South C “Golden Gate”, Downtown Pub & Restaurant, Sippers, Goan Gymkhana. 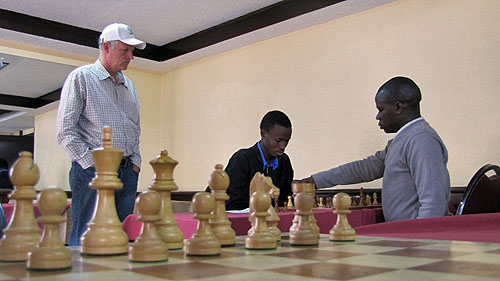 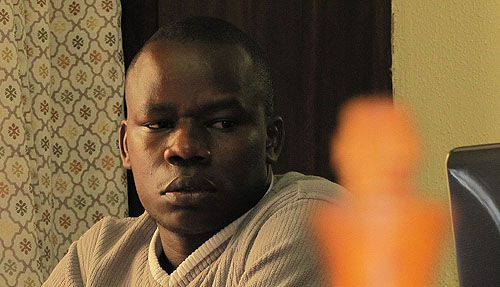 Akello Atwoli studied the remains of his game against Steve Ouma. A clinching swindle had put him through. I watched as Akello trapped a queen on g8, drew invisible patterns around the board, translated his post-mortem reverie into finger dance. Later on the two of us speculated on what would be the nature of our debut Olympiad. As we bounced off each other one appealing chess-tourism idea after another, Peter Gilruth, Kenya’s long standing No.1 and our Board One, interrupted our Russian daydreaming.

Around a chess board he gathered us two and the others (including the candidates for the board 5 Playoff, Singe, Ouma, Nderitu and Dolf). Like a wise old Luo elder of ancient times with young inexperienced warriors sitting around a fire, he told us that the Olympiad was more than mere hero-worship of the Kramnik. It was a responsibility to keep the legacy of Kanani, Andolo, Nguku and the other Kenyan Olympian giants who went before us alive. To make the best of our little ELOs and big spirit.

Kenyan history is steeped in vivid story telling in the form of oral literature. Here is an example – Caissa made the first chess brain some 50 km south of Nairobi in the pre-historic wastelands of Olegersaille. She called it Homo Sapien. Then from here, a couple of hundred thousand years ago, the Homo Sapien spread out of Africa and took the chess brain to all the other countries of the world. 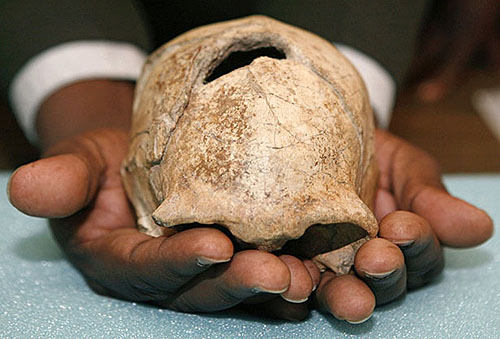 At 1800hrs on some odd day in September 2010, the journey will begin all over again: Five Homo Sapiens will board an air-o-plane at JKIA, out of Africa they will fly and into Russian airspace will enter the specie Homo Sapien Chessus Caissa…and onward to Siberia.

6 Responses to “The Road to Olympiad… from Nairobi to Siberia”