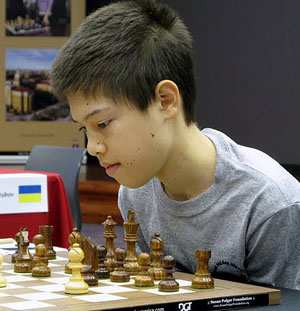 The 2009 SPICE Cup features two groups and the competition was fierce. Group “B: featured a group of hungry lions vying for norms and/or titles. IM Ray Robson (right) was a GM norm hopeful and made a good run before being held by FM Daniel Rensch in the last round.

Robson needed a win to get his 3rd GM norm and title while Rensch needed at least a draw to get his 3rd IM norm and title. Rensch actually got a better position and Robson had to give up the draw. However, this continues a string of strong tournaments for Robson. Let’s hope we see Robson playing for the U.S. Olympiad team in the near future!

Benjamin Finegold has been chasing down the GM title for years and midway through the tournament, it was clear that he had good chances. He torched the field by starting with 4/5 in the first half and clinching the norm and title in the 8th round after scoring his 6th point. He will be granted the title upon conferral. 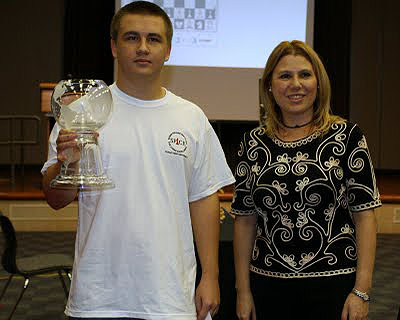 In the “A” Group, we had a collection young stars in an evenly-matched field. All eyes were on Filipino star Wesley So. However, the Ukraine’s Yuriy Kuzubov took the crown by winning a blitz tiebreak over both Dmitry Andreikin and Rauf Mamedov.

What was amazing about this group was the number of draws… a stunning 25/30 were drawn! The games were generally hard fought sans a handful of “Grandmaster Draws”… mostly from Kuzubov, the champion. His last five rounds were 21 moves or less, but a +1 was all that was needed to get a share of first.

After that Kuzubov was able to win the tiebreak after having conserved his energy. According to Polgar’s blog Kuzubov was an exchange down in the endgame, a minute down on the clock, but swindled Andreikin for a full point and crown!

While the “A” group didn’t shed as much blood at the exciting “B” group, there were some interesting encounters. Perhaps next year, there will be the “Sofia Rule” (no draw offers) or the “Ashley Rule” (no-draw offer for a specific number of moves). Neverthless the games were rich and perhaps this tournament has found a niche in the American landscape of chess. Congratulations Susan Polgar!