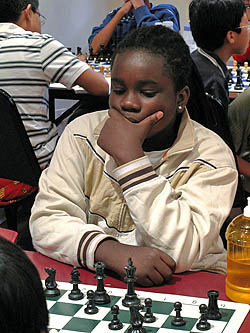 So much has been said about a number of rising stars in New York’s African-American community. Many names have been tossed around, but one of the latest stars has been Justus Williams who has slowly, but surely become one of the top 11-year olds in the country. Recently, Justus played in the Marshall G/60 tournament tying for first with IM Justin Sarkar. He ended by beating another rising star, Darrian Robinson and gained 31 points and is now rated 2051.

To show the level of competitive spirit that is growing in New York scholastic circles, several young stars were also participating. Elizabeth Vicary told The Chess Drum that Justus will take his skills to I.S. 318 located in the Brooklyn. This will continue the tradition of outstanding scholastic players having come through the program.

SPICE Cup sizzling in 1st half!