After the information logjam had been cleared, results are coming from what appears to be an exciting tournament in Tripoli, Libya. The first half of the 2009 edition of the African Championships has the Egyptians dominating affairs holding the top seven positions. However, several players are fighting to challenge the status quo. 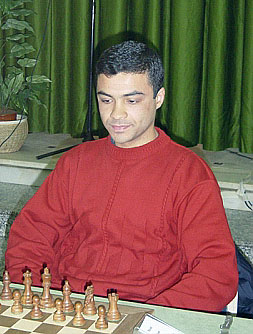 GMs Aimen Rizouk of Algeria (right) and Amon Simutowe of Zambia have hit a few bumps in the road. Rizouk was upset by IM Kenny Solomon in round #3 while Simutowe has been held by four strong IMs. Look for these two players to make a run in the second half while the Egyptians play each other. GM Slim Belkhodja is also in striking distance of the lead. Playoffs are looming to determine the final qualifiers.

Simutowe told The Chess Drum that this may possibly be the strongest African Championship to date. This is despite the defending champion IM Robert Gwaze and the runner-up IM Pedro Aderito not being able to compete. However, there are no reports coming out of Tripoli, nor are there any players blogging here about the tournament.

The women’s tournament seems to be heading for an exciting ending as well with Anzel Solomons leading the way. The games have been bloody with an amazing 90% of the games being decisive. Given this trend, a winner would be hard to predict at this point since a loss could cause a major shift in the standings. Defending champion Mona Khaled of Egypt will be trying to defend her title against the current leader and 2007 runner-up Solomons.

There are some rules of note that could affect the final standings.

First, the tiebreak system will use Bucholz. The twist is that for a massive 1st-place tie, the top five highest Bucholz scores will qualify and the others will play a playoff for the one last spot. Second, players from the same country cannot meet in the last round. This is an interesting rule that will certainly be advantageous to large delegations.Third, there was a “no-draw for 30 moves” rule in effect that will hope to cut down on short draws.