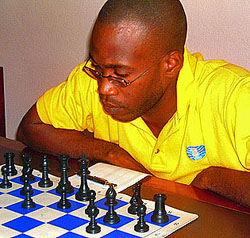 National Master (NM) Equitable Brown secured his second straight hold on the National Chess Champion title on Sunday, after securing a final round draw against Ryan Blackwood at the Norman Manley Law School. Brown ended the Championship on eight points, a full point ahead of his nearest rival.

The final top-of-the-table clash proved anticlimactic, as Brown, knowing he only needed a half point to secure the title, decided to take an early draw against his less fancied opponent Blackwood instead of going after the full point and risking a loss. Being the underdog in the match and with no hope of catching Brown, Blackwood was more than happy to end the game early. 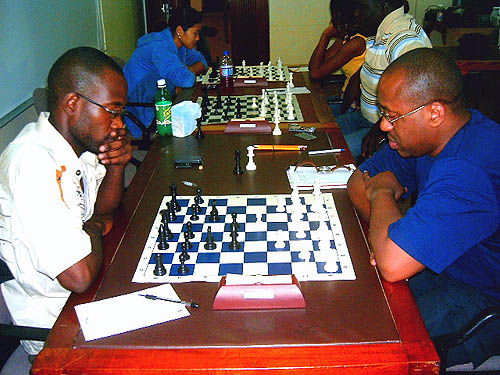 NM Equitable Brown (left) defeated NM Peter Myers (right) in the penultimate round on Saturday, to all but secure the National Title.

The focus therefore shifted to second place as three players NM Andrew Mellace, NM Peter Myers and Damion Davy, each were vying for runner-up accolades. Mellace and Davy who were up against each other in their final match, like Brown, decided not to risk ending up down the field and agreed to an early draw. This left each player tied in second on seven points. Myers eked out a victory against NM Brandon Wilson in his last game to end on seven points and secure a share of the second place prize.