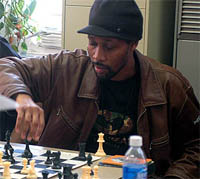 RZA (right) of the 90s revolutionary group, Wu Tang Clan continues to forge ahead with his latest project. This working on another soundtrack to a new series, “Afro Samurai.” He wrote a previous soundtrack to the anime series in 2007 and has also written for the “Kill Bill” soundtrack. He later starred with Denzel Washington in the hit movie, “The American Gangster.” An interview on HipHopDX talked about his early influences, his projects including wuchess.com and his work with Adisa Banjoko’s Hip Hop Chess Federation. The HHCF will be kicking off their 2nd King’s Invitational tournament on February 28th. RZA talks about the concept:

“Chess is a big part of Wu-Tang and a big part of our life. Now that I really study the game, it’s becoming a more profound part of my life. I like to share that with people. People thought chess was a game for nerds…Hip Hop was just for the ghetto….martial arts was just for Orientals. Nah, all three of these artforms are universal. They have an underlying thread between them that’s also similar, as far as their flowing potential.”