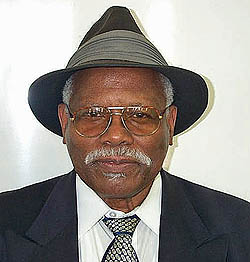 John Evans (pictured right) was a member of the Panamanian national team back in the 60s and later settled in New York. He visited the Wilbert Paige Memorial in 2001 and added to the importance of the event.

Here is a game he played against none other than Robert James Fischer. The game was part of a simultaneous exhibition in Washington, DC in 1964. Thanks for Bob Ali of the Kingsmen Chess Club for getting this piece of history!