Wojciech Bartelski started OlimpBase.org as a 25-year-old young man with the idea of documenting many important tournaments and team events around the world. He immediately became a valuable resource for chess journalists around the world, especially for Olympiad data. Recently in a WhatsApp discussion for chess journalists, Babatunde Ogunsiku (Africa Chess Media) and Kim Bhari (Kenya Chess Masala) spoke about how impressed they were with his work. Of course, this sentiment isn’t new.

There you can find summaries of each Olympiad with interesting back stories, exciting games, and most importantly data tables for each Olympiad along with country and individual player records. It is a treasure trove of information. Olimpbase has become the primary resource for finding historic data since 1924.

Of course, as time goes on, we change our objectives in life and Bartelski entered the political arena of Poland. In 2006, he was elected to the Warsaw City Council and later served as the Mayor of the Warsaw borough of ?ródmie?cie. Just before the Chennai Olympiad, Bartelski told The Chess Drum,

When I started creating my site I was 25. From today’s point of view I cannot really imagine how much of a free time was at my disposal so I could focus on it. Now it’s much worse and I only occasionally add historical collection when I get some new data. 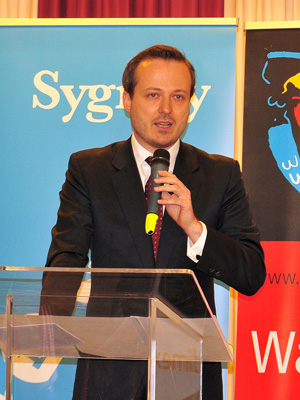 The site still has a lot of fans and a quick search on “olimpbase.org” on Twitter will see many players referring to the site for many points of fact. Unfortunately, the site does not include 2018 as Bartelski has not had the time to devote to the site. Journalists have discussed the value of his work and suggested that he enlist the help of others. It is important that he also gets credit for his work.

Unfortunately back in 2012, OlimpBase was at the center of controversy. The Chess Drum reported that the entire section of Olympiad reports on OlimpBase had been copied and made into a book at the Istanbul Olympiad. Bartelski’s work had been the main resource for Olympiad coverage at this site. After purchasing and comparing the book and his site, I contacted him and told him his works had been plagiarized. Ironically, Ali Nihat Yazici, who had lambasted journalists over ethics, oversaw the book project.

After he received his copy and affirmed the infraction, he chose not to file a grievance against the violators. It is unfortunate that no sanction was given to those who violated his work. The point is that Bartelski put in valuable years in compiling this data and a group of individuals decided to copy it and sell the information (28 euros). It was an egregious violation and may have discouraged Bartelski from continuing on. To make it worse, Yazici filed an ethics complaint against this writer for reporting an ethics violation!

It is ironic that Yazici filed an ethics complaint against me because I pointed out an egregious violation (plagiarism) of Wojtek Bartelski’s https://t.co/vJex9cIY2W site. He filed a complaint with the FIDE Commission. Fortunately, it was rejected. https://t.co/s1AdiFSLzm

Nevertheless, we need to preserve this magnificent contribution to Olympiad chess and applaud Wojciech Bartelski for his work on OlimpBase.org. He should be commended for his time, his effort, and for taking the initiative to chronicle the beauty of Olympiad tournaments over the years!