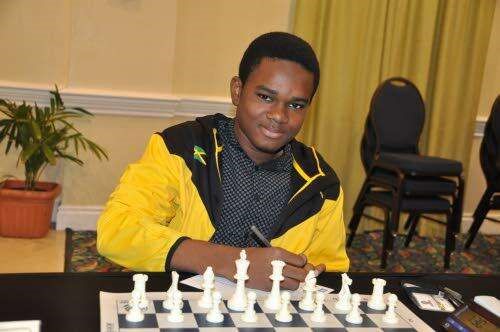 Newly-crowned ladies national champion Hannah Wilson, however, made sure locals had something to cheer about by winning one of the two categories for lower-rated players when the five-day event concluded on Thursday night, National Heroes Day.

The tournament was divided into three sections, the most significant being the Masters division which was keenly fought out by International Master Orlando Husbands and FIDE Masters, Christie, Justin Blackman and Trinidadian Kevin Cupid.

Contested as a double round-robin event (each of the four competitors played each other twice) over six rounds, the section produced six draws from 12 games. In the final round decisive game, the 20-year-old Christie, the no. 2 seed behind Husbands, defeated Blackman to emerge champion with four and a half points.

Husbands, who won his last round game against Cupid, had to settle for second place with three and a half points, while Blackman was third with three points. Going into the last round, Blackman was in contention to take top spot but missed out after losing to Christie in his only defeat of the tournament. Husbands also only lost once – to Blackman in the third round.

The 13-year-old Wilson, who became the youngest Barbados ladies national champion last week, continued to show her improvement by comfortably winning the Challengers section for players with a FIDE rating of under 1400.

Wilson, the no. 2 seed behind Kiarra Eversley, finished with six and a half out of a maximum seven points in the section that contained eight players and was contested as a round-robin.Gaybrianna Moore took second place on the tie-break ahead of Chanon Reifer-Belle and Tarquin Clark after the three players ended with four and a half points.

The Candidates section, which was for players with a rating between 1400 and 1800, was convincingly won by top seed, veteran Trinidadian Candidate Master Frank Sears. Sears finished with six and a half of out a maximum seven points, two points clear of Justin Parsons and Emar Edwards. Parsons placed second on the tie-break.

The event, which was not staged in 2021 and 2021 because of the COVID-19 pandemic, featured 20 players in the three divisions and was held at the Coles Building on Bay Street, Bridgetown.