Magnus Carlsen is looking to get to the 2021 FIDE World Cup final despite having no need to claim a Candidates spot. Jan-Krzysztof Duda is seeking a breakthrough result and has played inspired chess thus far. The first game was a bit tense, but neither side ever got enough pull on the position before the ensuing rook ending was drawn.

The other semifinal game was a Russian derby with Vladimir Fedoseev playing white against Sergey Karjakin. This game was almost perfectly played with the evaluation showing equality throughout the 69 moves. It doesn’t mean the game was dull as there were many twists and turns in the rook ending. In fact, Fedoseev thought that these endings can sometimes be won.

Modern digital cameras are simply amazing. With anything above 24mpx, you get an astonishing level of detail. ? #FIDEWorldCup #nikond850 #Fullframe pic.twitter.com/r0S2qIUG3p

An intergenerational battle occurred today when top-seed Aleksandra Goryachkina faced former world champion Alexandra Kosteniuk in the finals of the Women’s World Cup. The game ended in a textbook fashion but began in the ever-popular Catalan with Goryachkin’s white pieces getting an early advantage in space. Kosteniuk sacrificed a pawn in the middlegame for the two bishops and a passed c-pawn. 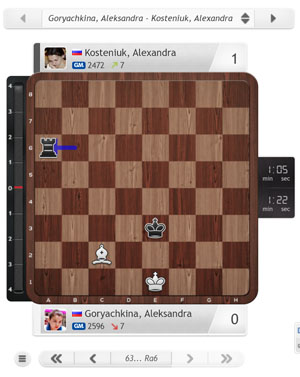 Final Position after 63…Ra6. White will lose the bishop.

A skirmish ensued when Goryachkina sacrificed a pawn for a kingside attack. Kosteniuk remained unflappable as she allowed a discovered attack on her king realizing that her king was adequately sheltered after 40…Kg6. When the smoke cleared, it was white whose king was dangerously exposed. However, black was unable to find the most accurate moves and the game went into a tricky ending.

With the game heading for a draw, Goryachkina found herself on the bad side of a rook versus bishop ending. The ending is drawn in many positions, but the white king was already in a bad position. Battling nerves and fatigue, Kosteniuk was able to find the winning formation. She gave her impressions of the game.

In the third-place battle, Tan Zhongyi and Anna Muzychuk played a complicated game, but ended with a perpetual check. Interestingly enough, the game mirrored the Fedoseev-Karjakin game for the first 12 moves when Tan Zhongyi opted for 13.Bxf6 instead of Fedoseev’s 13.Nb5. Tan’s attempt seemed to release to the tension too early.