Both Sergey Karjakin and Jan-Krzysztof Duda seem content for a “feeling out” process, but there are only two games. Both were following a game from the Tata Steel featuring Magnus Carlsen and Duda. Karjakin had prepped for that game, but got an unexpected response from Duda. He decided to bail out when he found himself out of prep after 17 moves. It was disappointing, but both may be content with going to tiebreaks. Here was the reaction from the third-place participants.

Fedoseev and Carlsen react to that 17-move draw in the World Cup final next to their board. https://t.co/GvOYBrADG0 pic.twitter.com/GjuNoJN9Me 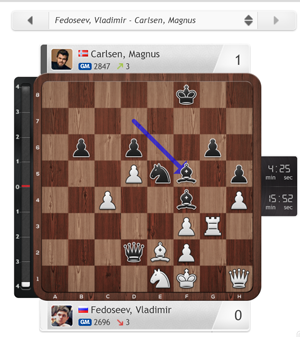 After an inventive exchange sacrifice, black pieces are swarming while white’s queen helplessly watches the invasion.

Yes, the Fedoseev-Carlsen game would be far more interesting. The game started out as a King’s Indian, but the Russian went 3.h4!? Despite this shock, the fans were in for another, 16…f4!? 17.Bxf4 Bd7 18.Nd1 Rxf4! This exchange sacrifice would have as compensation control of the dark squares. The black bishop bore into the kingside while after 25…b5!? the black queen broke down the door on the queenside.

The white queen was hemmed in (g1, g2, h1) looking on helplessly. In the diagrammed position, black is all over white like a cheap suit. By the time white could give the exchange back, black had gotten a tight grip on the position. All Fedoseev could do is shuffle his pieces around on a few squares. He resigned in a miserable position. In the interview, he discussed the game and also the loss to Duda. Very revealing!

Inside Look at Kenyan Chess