Ju Wenjun equalizes with Aleksandra Goryachkina after a resounding win in game 9 of the Women’s World Championship. The Chinese player played dynamically and flummoxed the commentators with her 21.a4! A new commentator joined the booth as “Nikolai Shortovsky” gave his insights on the position. 🙂 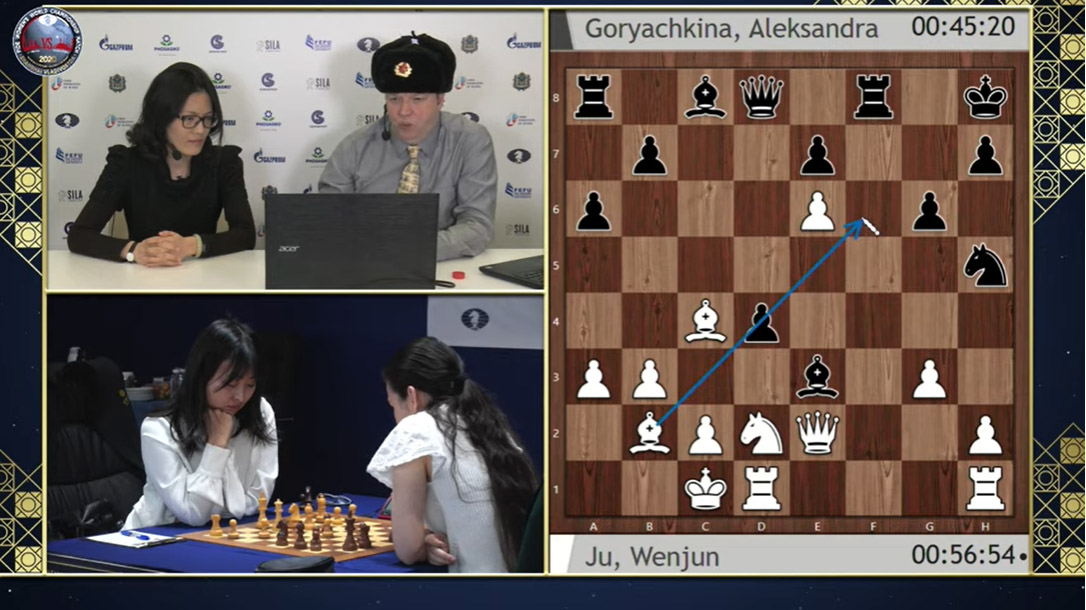 After Nigel Short returned, he and Hou Yifan were both skeptical of her play because it exposed the white king. In fact she had seen that the b-file could be plugged up and at the same time, the two bishops would rake the black kingside. However, the critical moment came when Ju Wenjun sacrificed the exchange to exploit the a1-h8 diagonal.

However, tension in a championship match makes such positions doubly difficult. While Goryachkina had better moves, but perhaps got nervous and begin to falter. The move 27…Rd8 was criticized by the commentators although the engines give -1.14. It does appear that 27…Qb4! would have given black a definite edge.

"Maybe Rd4 is just worse", admits Ju Wenjun. The World Champion appeared to be worse after the exchange sacrifice, but a few moves later she had the game under her control. #WomenChessMatch pic.twitter.com/Od0FL3eEHl

The game was rich in complications. There was an interesting moment after 29…Qg2? giving Ju the chance after 30.Qe5 (threatening both Qxb8+ and Qxf6+!) Rxb3 31.cxb3 Qc6! There was still a lot of tension in the position and Ju found a way to advance her king and trade queens. Black’s queenside pawns were an immediate target and were eventually lost. Ju was able to sacrifice her last piece and get her pawns rolling. This was too much for the black bishop and Goryachkina conceded.