Black scores the first victory of the match and it is a crucial one indeed. Ju asserted her authority in a Queen’s Gambit Declined and repeated the game from a couple of games ago when Ju played Ne4. That game did not turn out well for her. She did deviate with 6…Bf5!? receiving plaudits from GM Nigel Short. The game followed Ganguly-L’Ami played yesterday in Wijk aan Zee.

The resulting middle position had a lot dynamic subtleties that Short and Hou Yifan were working out. They were using the Carlsen-Kramnik game as an illustration. Carlsen won resoundingly, but if one looks at the Ganguly-L’Ami game, there is a strong resemblance.

How the hell has black scored 1.5/2 with THAT bishop? pic.twitter.com/CQztwTLGTO

What is interesting in the position is the fact that so many rules of chess have been broken. One of the differences between chess three decades ago and today is that players would never play a position with such a wretched pawn structure.

Nowadays, players consult with the engine and if it gets a good assessment, they’ll play it regardless of how horrible the structure is. The dynamism is what is important, but how does one make sense of this transition in chess understanding? It is certainly due to the advancement in the use of computers.

In this game, it is hard to understand how such a “bad” bishop can solve such problems. The commentary was actually quite fascinating and demonstrated another level of chess proficiency. The main site stated that the position had so much tension and psychology came into play.

What happened to Goryachkina next had more to do with sports psychology than with sound chess. Starting around move 25, the game was a dead draw—a result she could have forced at any point all through the first time control. Instead, she made moves like 26. b5 and 38. Bd5, probing for an advantage that was simply not there.

Ju switched her focus onto the queenside where she had a fluid pawn structure. Finally, the break 26…c5 came and this is where white began to lose the thread and play in risky fashion. Perhaps she felt there was little risk of losing the position. In fact, the commentators kept repeating the game would end in a draw.

One of the dangers when losing a game in the match is the tendency to try to win immediately. Goryachkina was able to do that in Shanghai and perhaps was overambitious. Optically, black’s position looked worse all along and this may have clouded her thinking. The final moment occurred when Goryachkina tried penetrating with the rook. After 34.Rd7 Re6 35.Rxd5 Kc6 36.Bf3 Rd6. “All drawn,” said Short. 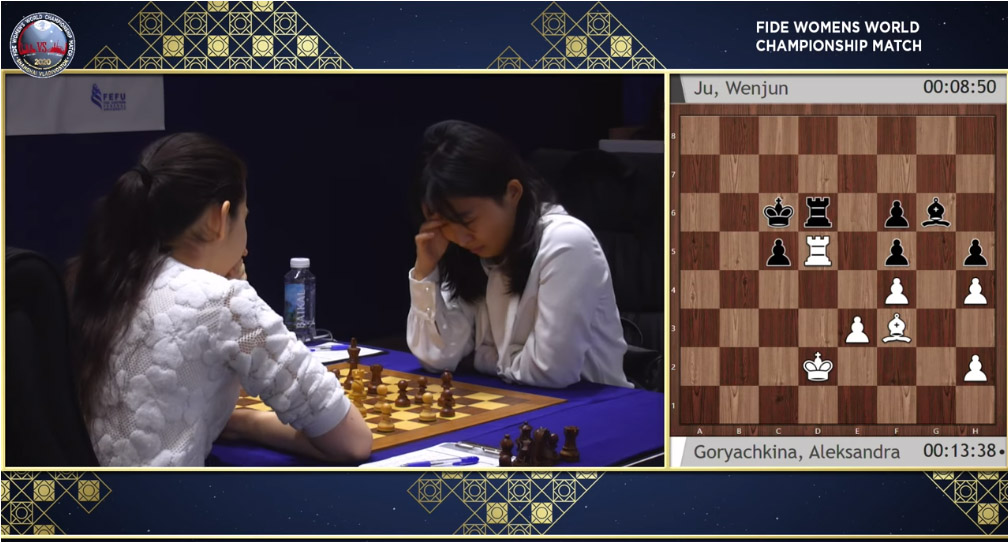 However, the Russian went for more after 37.Rd3+ Kc7 38.Bd5, but after 38…Be8! black’s bishop was suddenly alive. Ju managed to swap the bishops and the outside passed c-pawn was the trump. Somehow Goryachkina began to play some suboptimal moves and the rook ending became impossible to hold. At the press conference, Goryachkina stated that she felt she was in control and was not affected by yesterday’s loss. Perhaps she got overzealous.

This game had many subtleties and not easy to play, but Goryachkina should have been able to secure the draw. One may ask if Goryachkina is unraveling as the tension is ratcheting up. There is a rest day and then the last two games of the match. If Ju wins again, she will clinch the match.