Games off to a sizzling start

There are not enough superlatives to describe the organization of the 12th All-Africa Games thus far. Mehul Gohil of Kenya gave the event full marks and sent loads of photos showing the excellent conditions. “Maputo in 2011 was wonderful. This is even better,” he said. Of course, what would a first-hand experience be without any photos to capture the moment? 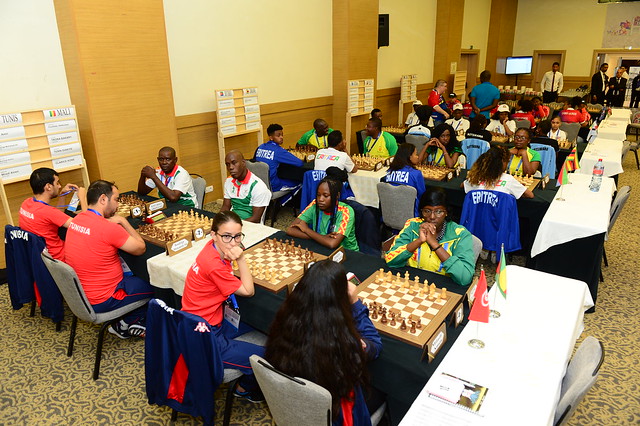 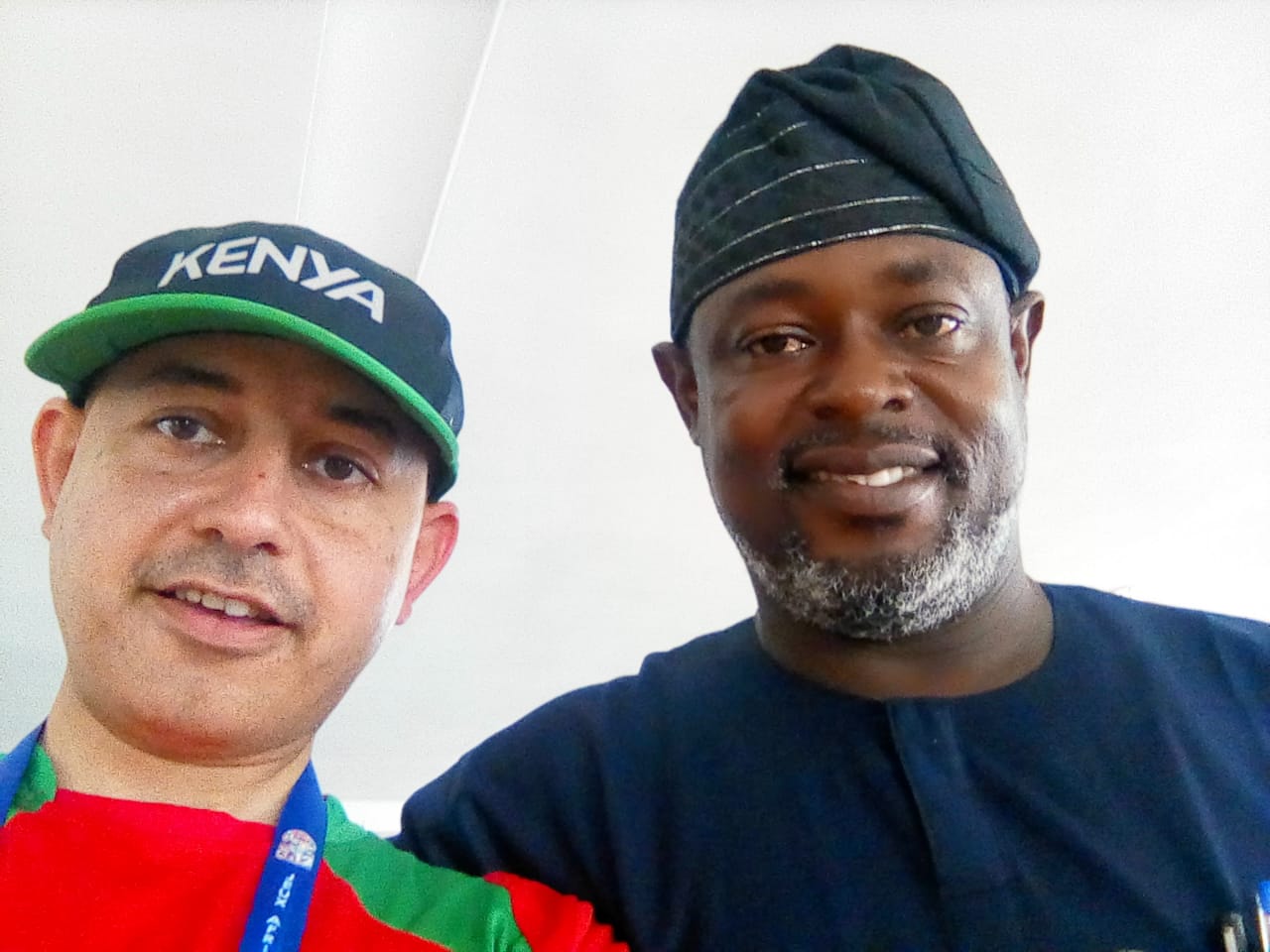 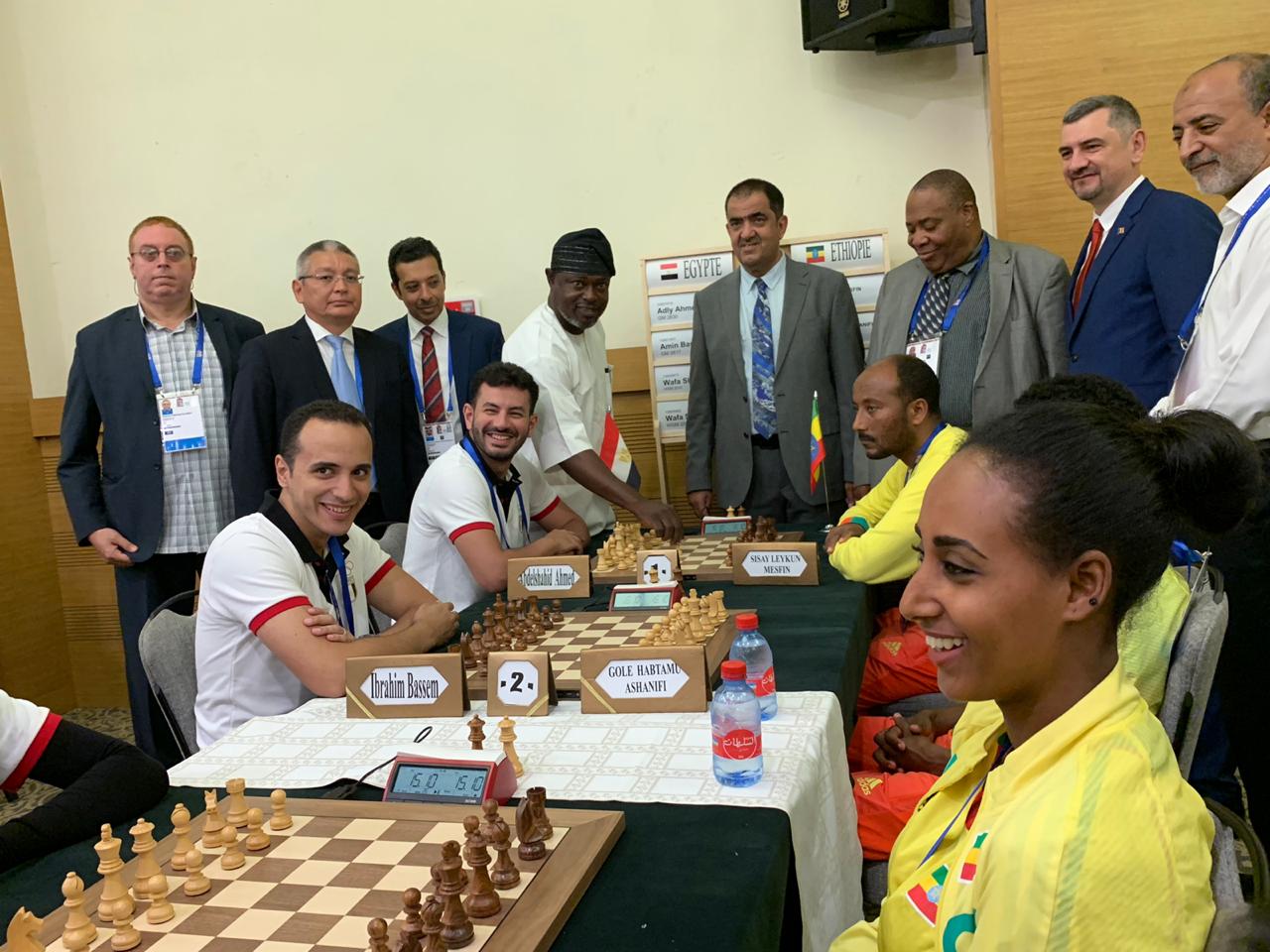 Action started with the mixed team event. Five rounds with each team fielding two men and two women. The first round was a wash with the favorite winning the matches by large scores. Only Nigeria failed to get the 4-nil verdict giving up draws on the top two boards. It was good to see teams from Mali, Central Africa Republic, Eritrea and Cape Verde. These are small and relatively new federations. 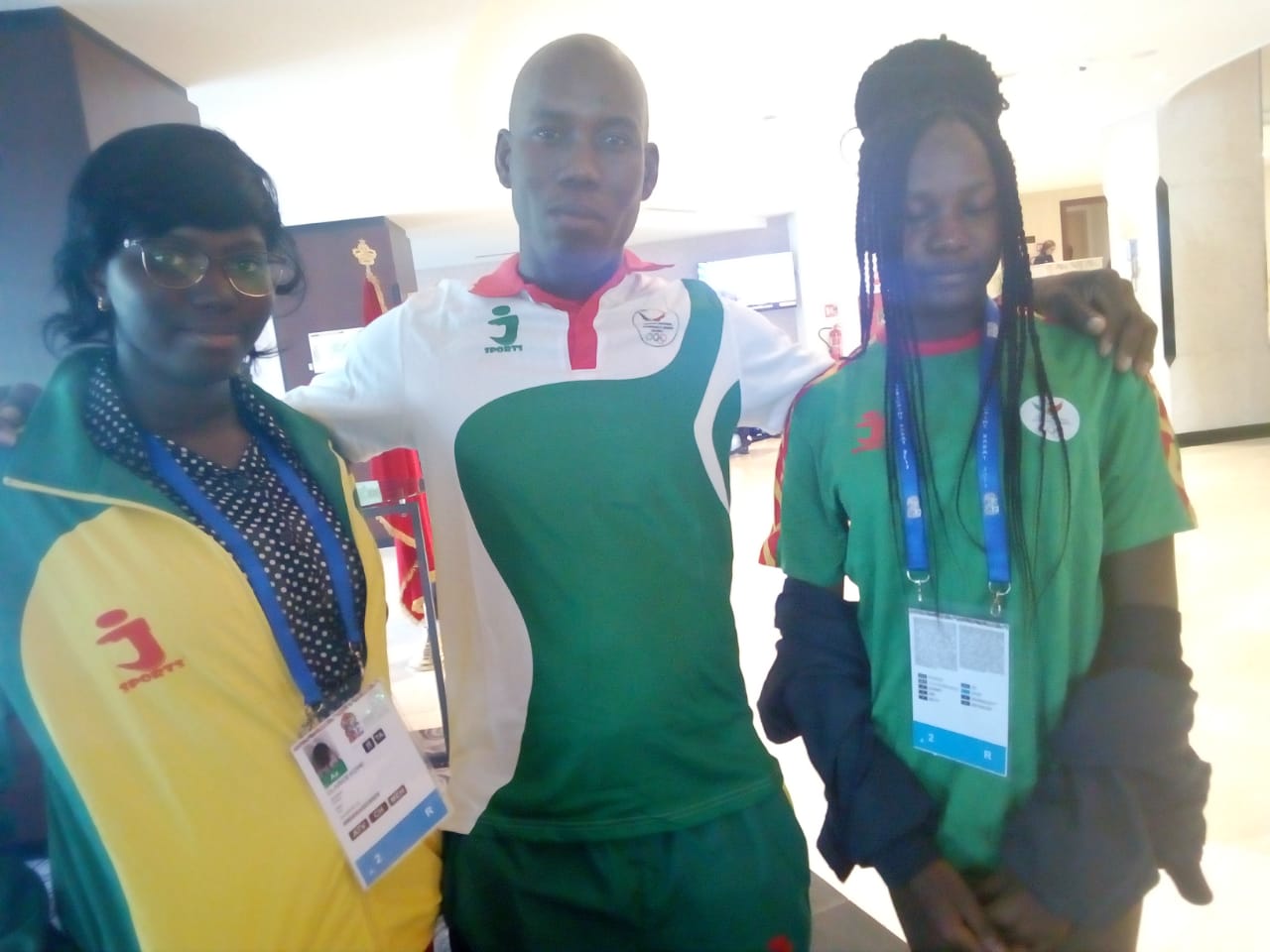 Mali brought a team including one FIDE Master.
Photo by Mehul Gohil

It would be interesting if Africa got all 54 nations to join FIDE. Twenty teams made the trip with Egypt the top seed. With Bassem Amin and Ahmed Adly on the top two boards, the the Wafa sisters, other teams would find Egypt a tough challenge.

Both GM-led Algeria and Morocco got wins, but one thing apparent is that competition is getting tougher. While the score piled up the games were surprisingly competitive. In the second round, the matches were closer and only one team scored a “clean sheet” with Sao Tome Principe beating Central African Republic 4-0. The other matches were more or less competitive, but there was a controversy that held up the pairing for round six.

On the fourth board of Morocco-Tunisia, the game Closed Sicilian look promising as white won an exchange, but black had compensation. Then the game became tense and errors started to pile up. White ended up losing the exchange and it appeared that black was firmly on top.

Unfortunately black went for 34…cxb3? 35.Rc8+ thinking she would promote her pawns, but after 35…Kg7 36.Qxa3! bxa3 white was hanging on. Black had clear compensation for the exchange with a mass of pawns, but the fleet rook begin to pick off pawns. In the end, white was a clear rook up when in time pressure she left her king hanging and controversy ensued. According to Mehul Gohil of Kenya, both players were below a minute on clock when the Tunisian made the illegal move. 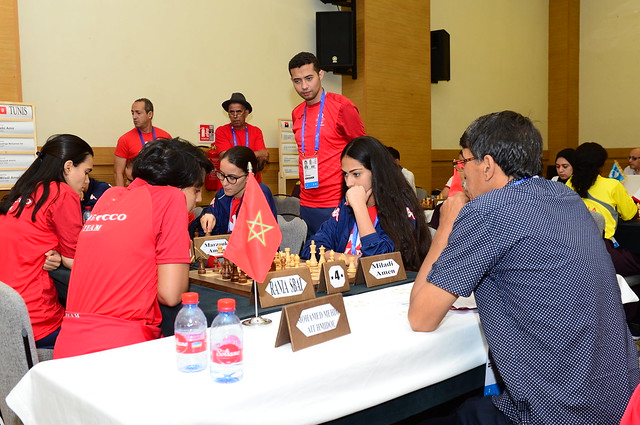 The controversial match…
Mayar-Marzouk is the second board to left. 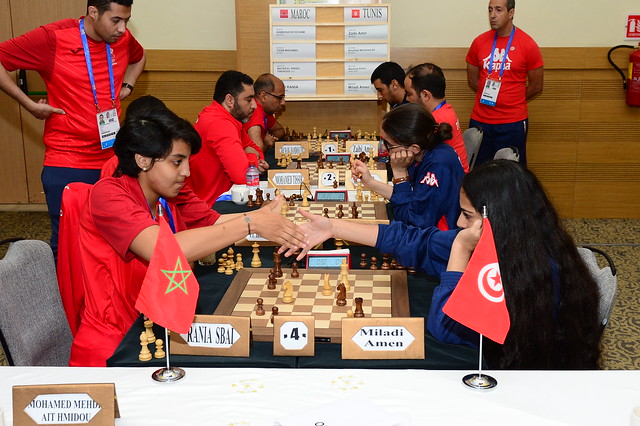 We can see the rook on a3 in the disputed game. 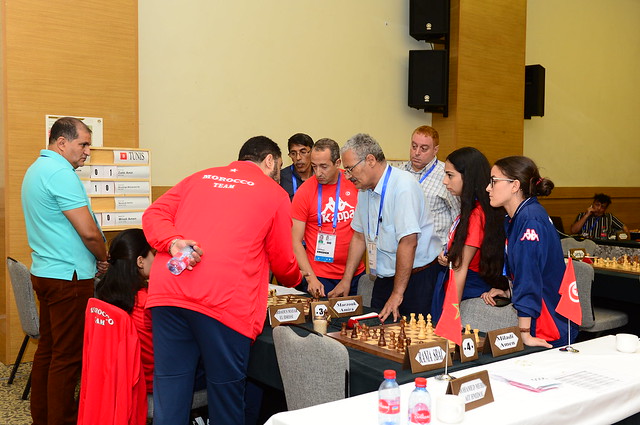 The arbiters try to sort it out.
Photos by Mohamed Bounaji

There was a question as to what the penalty should be and the round was delayed until it was sorted out. The journalists could not get any information on the ruling, but in the end, the Tunisian got the verdict and salvaged a draw on the illegal move. Unbelievable! Tunisia earned a 2-2 draw. 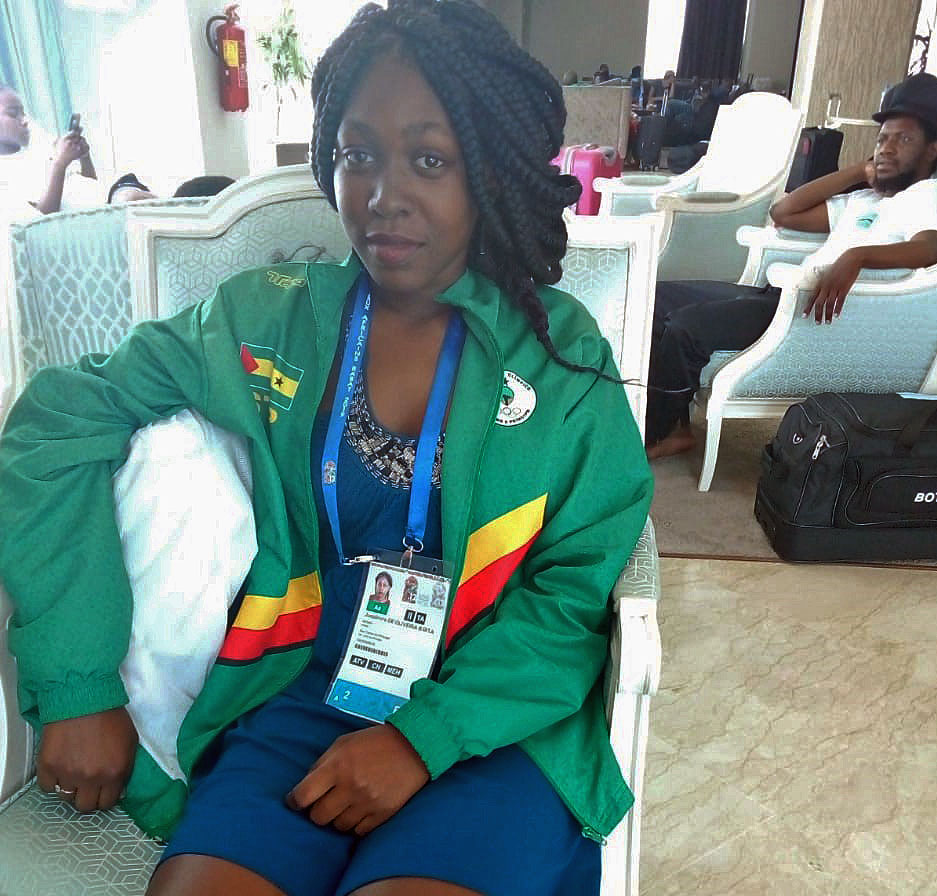 In round three, Algeria would try to test Egypt, but all they could manage was a draw on board one with Ahmed Adly and Bilel Bellahcene splitting the point. Morocco edged Botswana and Providence Oatlhotse held Hichem Hamdouchi in a game that ended with a funny locked position. Oatlhotse would score a GM-scalp against Bellahcene later on.

Angola-Nigeria engaged in a pitched battle as they are two of the most talented countries south of the Sahara. Oladapo Adu tried to employ a hedgehog, but Pedro Aderito played an early e5 and got an edge. Amidst the complications, the Angolan seemed to get a winning position, but later got his rook trapped! Blitz kills. The Nigerian reeled in the point giving Nigeria the margin of victory.

Round four had some interesting games. African champion Shrook Wafa converted a R+N vs. R against Firdaous Mayar of Tunisia. The game was completely drawn, but the Moroccan fell into a trap and lost her rook to a fork. What a horrible tournament for Mayar who also lost the controversial game in round two.

Another game that needs a look on how to press the initiative was Bellahcene-Adu. That game started 1.Nh3!? but after a dozen moves, white had a normal position. The Nigerian fell asleep at the wheel and was hit by 19.Nxd5! White sacrificed the queen and it was instructive to see the two rooks dominate the open d-file. A nice shot at the end was elegant.

One of the tricky parts of the mixed event is the unpredictability of the bottom boards. Many of the teams have inexperienced players and the tension is much greater than anything they may have faced. Also some of the games have been played all the way until checkmate which is interesting because on the lower boards you get see some wonderful mating patterns! Check out Mesfin-Kourakouba, Haile-Gamba, Kone-Morais!

In the last round of the day, Egypt continued its dominance with another +3 win against Tunisia. Nevertheless, they have only a two-point lead over the field. Algeria beat Botswana, but as mentioned Bellahcene lost on board one! The Algerian started his black game with 1.d4 Na6!? I suppose his successful use of 1.Nh3!? had given him confidence, but this reality was soon shaken.

The Algerian got a normal position, but the structure is not one of the most ambitious for black. White kept the edge, but after 20 moves of maneuvering, black sacrificed an exchange. Immediately the evaluation goes to +1.26 meaning that the engines were not impressed. It turns out that black didn’t have full compensation especially since his bishop was restricted by his own pawns. The Botswana player held the exchange, kept the black queen at bay and ended the game with the nice 87.Kh1!

Zimbabwe scored an upset win over Morocco with Rodwell Makoto holding Hamdouchi. The game ending with an improbably five pawns against a rook! The Zim player had actually got a crushing kingside attack, but the wily Grandmaster held on for dear life. He had to sacrifice material to survive. At one point, white had two pawns for the rook… then three… then four… then five! The final position is amazing. Mohamed Tissir was brutally crushed by Emarald Mushore while the women traded wins. The shock of the round had to be Angola’s +3 drubbing of Zambia.

Egypt ended the first day of play with a two-point lead, but they have also piled up the board points with a total of 18. Algeria has 13.5. Should be an interesting day tomorrow!