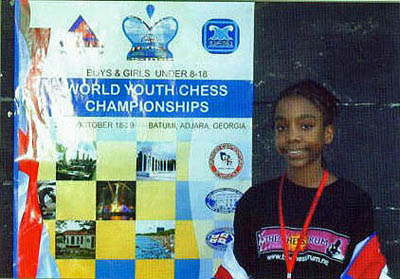 Darrian was very cute and shy girl who peered at the chess board with intense focus. Very soft-spoken, she was able to assert herself and build her confidence at the famed IS-318, the school featured in the movie, “Brooklyn Castle.” While she was seen in the movie briefly, Darrian had already moved on to Packer Collegiate Institute. While considering universities, she stated that chess helped her to stand out.

I think being the highest-rated African-American female chess player in the U.S. has helped me stand out from the crowd. It’s something most people don’t have under their belts. It helped me get into college. I remember the person who read my application to the University of Chicago came up to me during the meet-and-greet for incoming first-year students, and he remembered me immediately and that I played chess competitively. (link) 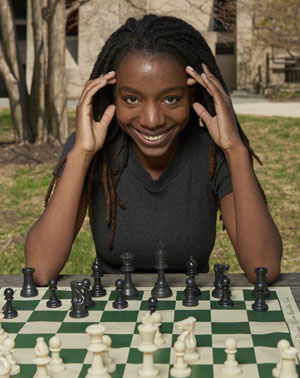 Indeed. That article was one of many featured here on The Chess Drum and Darrian has always shown her appreciation for the exposure on The Chess Drum. She was also interviewed while at U. of Chicago where she weighed in on the Chicago vs. New York pizza debate!

During her chess development, her mother Cenceria Edwards was seen accompanying her to chess tournaments. As any chess parent would know, investing in a child’s activities doesn’t come cheap, but it is apparent that such time and effort are well worth it. It is amazing that Attorney Edwards kept her own goal of a judgeship in focus and now serves in New York City Civil Court. Darrian plans to attend graduate school, but has not decided on whether to attend law school or opt for the vaulted Ph.D. degree. Additional links on Darrian Robinson

Where are they now? Kayin Barclay

Where are they now? Rochelle Ballantyne