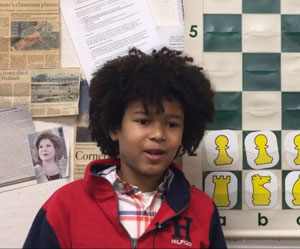 Sometimes serendipity smacks you in the face. Last night while on Facebook I get a Facebook Live alert from Valerie Idehen that Maurice Ashley was playing blitz in Los Angeles’ Starbucks. I tune in and watch him beat several players with 5:1 odds. That’s not the story unless you’ve never seen Maurice play.

After Maurice was done, he was amiably chatting with other players someone mentioned “12-year old prodigy named “Tre.” Then the question started about how to find the boy. They commented that he played (and taught) at the LA Chess Club and occasionally came to the coffee shop to play blitz. I immediately started looking for “Tre” and was Googling different spellings. No luck. Then someone showed a YouTube video of a boy with an Afro analyzing a position at a demo board. Very articulate and not camera-shy.

As Maurice was signing autographs on everything from coffee sleeves to bus cards, Valerie asked him, “Did you hear about this 12-year old prodigy named Tre?” “Who’s Tre? What’s his rating?” Maurice interest was piqued, but no one seemed to know any details. “He teaches at the LA Chess Club.”

“We gotta to find Tre,” said Maurice. Then someone showed him a different video showing Tre wearing a colorful cap. Maurice was impressed. “He looks awesome.” Definitely. “Who is his coach? We gotta go find him.” After a few minutes of watching Tre at the demo board, the search was on to find this bright boy. I found a video link and after another search learned his full name was Tremil Anderson, a local talent.

Tre will be coming for Maurice’s commentating job in a few years!

What immediately stuck out is the comfort of how he expresses himself. I have been a university professor for more than 20 years and a few of my adult students are less comfortable than Tre when presenting. I supposed when you’re presenting for a grade it’s different. 🙂

So here’s the video Maurice was shown…

Notice how comfortable he is with presenting his ideas. It is rare to see this level of maturity, and some high-level Grandmasters even struggle with it. Former World Champion Garry Kasparov once said, “Hard work is a talent” and Tre is already showing that he can work hard at improving in chess. While there is not much information on him in scholastic chess, there are a few videos of note. He tied for 1st in the Western Class Championships last April and has a current USCF rating of 1944.

Note that he is a Dragon aficionado and plays an insane game against NM Robert Shlyakhtenko, a U.S. All-American. One of the things I would caution Tre about is responding to every comment on YouTube.

What is good about Tre is that he did ANOTHER video analyzing the game above after many naysayers commented that he should have captured the rook with Nxh1 instead of playing Nxe4. In this video, he goes through the game move-by-move and explains his point. This shows that he is self-critical and seeking to improve. While he certainly is a chess talent, his work ethic is more impressive.

At this rate it is possible that he could make National Master this year. Finally is another game with Tre analyzing an interesting game in the Tarrasch French. After the session, club manager Mick Bighamian analyzed the same game.

It is obvious that Tre is a huge talent and the work he is putting in will yield dividends in chess and anything he aspires to do in life. It appears that Maurice will have competition to commentate the next Sinquefield Cup! 😉