Different day… same sh… stuff. Not really. Today’s round had four draws and one win by Hikaru Nakamura and more unorthodox openings, so that the same. Anish Giri tried the London System perhaps an inside joke in honoring the moment. Everyone was in on it, even his opponent…

Wesley So: "Today Anish surprised me with the London System, because we’re in London" #LondonChess

He ended with the same result as Carlsen’s “Trumpowsky Attack” but not before Wesley So tried to deliver a knockout blow with 12…f4!? It seemed as if Giri was busted, but he calmly gave back the pawn and consolidated. So bishops were much better and he ended up winning a pawn, but didn’t capitalize on his opportunities.

While the games have been hard fought and inspiring, one player wanted to inspire with his attire. He became the focus of a trivia question by Press Officer Fiona Steil-Antoni. Who is this man?

After many guesses, it turns out that it was not Anish Giri, nor a Michael Jackson impersonator, but… 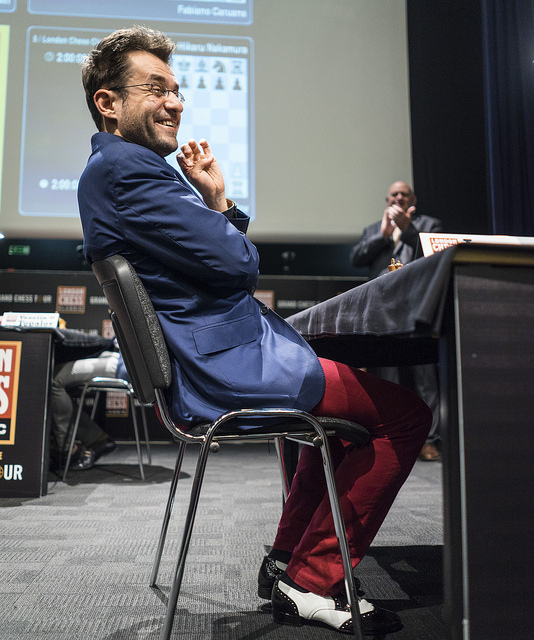 The effervescent Aronian definitely made a fashion statement!
Photo by Lennart Ootes

As Spike Lee said to Michael Jordan, “It’s gotta be the shoes!” I’m sure Lev wishes his shoes would’ve brought as much flair as his outfit. Caruana-Aronian was an anti-Berlin where black spent a tempo to place his bishop on c5 to the surprise of many commentators. Thus, it appears that elite players today are breaking traditional rules to gain a psychological edge and to sidestep prepared lines. We’ve seen castled kings with no pawn cover, strange pawn thrusts, rooks lifts and spent tempi. We have entered a new era.

Nevertheless, the tense battle that ensued was a fairly equal affair with an interesting feature that only one pair of pawns had been exchanged before black captured another pawn with 29….Qxe3 allowing a three-fold repetition. Anand-Adams was another Guioco Piano Where the five-time World Champion got nothing special. Adams, who had a rough start with two losses held his second game and seems to be steadying himself… or a least increasing in confidence.

Adams: "I'm still pretty shaky but at least I survived the past couple of games" #LondonChess #GrandChessTour

In Kramnik-MVL, a Grunfeld saw the sharp 7…e5!? as theory continues to take new turns. There was some fireworks in the middlegames with 13…f5!? 14.Nc5 c6 15.Bb2 Qd6 16.e3.Nxc4!? but black did not equalize… not just yet. White increased his advantage with the powerful 21.d5! as black’s pieces were flat-footed on the first rank. It appears after white’s 22.dxc6! he is clearly better. There was a frantic exchange of pieces and when the smoke cleared, white was a pawn up with a superior bishop over the knight. However 28.Kf1 may have allowed black adequate counterplay and MVL scrambled for the half-point.

The decisive game of the day was Hikaru Nakamura coming off a win over a former world champion, faced another in Veselin Topalov. This game had an interesting sidenote with the retrograde opening of 1.e4 c6 2.d4 d5 3.e5 c5!? which ventures into a type of French without the c8-bishop being hemmed in. Immediately, the game became un-French like with violent skirmish in the opening.

Topalov went in for a speculative queen sacrifice after 17.Nxe7 Rb8 18.Nxf5 Rxb5 19.Nxg7+ Ke7 20.cxb5. White had three pieces for the queen, but was unable to coordinate them due to the far-reaching tentacles of the black queen. If one puts this game into a database and play the moves from move 22 forward, notice that the black queen roams the entire board hunting down and devouring white material.

In the end, the queen had devastated the white army and after 53…Rc6 was ready to deliver mate. This game would make a good drama tragedy! Tragedy indeed. This is what describes Topalov’s performance thus far. He has now dropped to #19 on the live rating after being over 2800 in last year’s London Classic. The question may be swirling, “Is this it for Topalov?” Is he readying for retirement from professional chess? Certainly appears so.