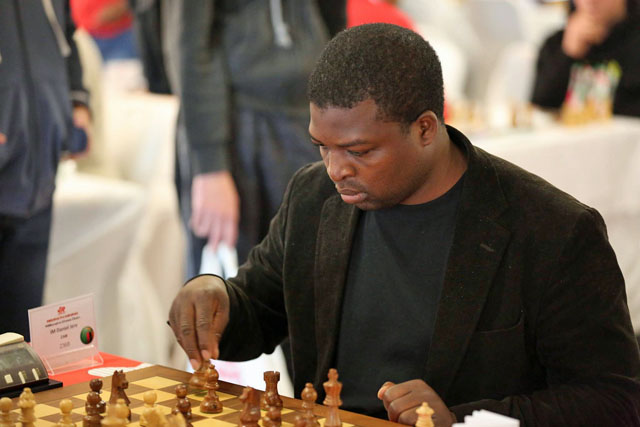 Zambia has long lived in the shadow of African chess powers, but they have repeatedly produced players of great talent. GM Amon Simutowe of Ndola, Zambia, is one of the greatest talents ever produced in Africa. However, chances are rare for players in the sub-Saharan region which is why opportunity to play in the Millioniare Chess (MC) satellite tournament was attractive to surrounding chess nations.

Millionaire Chess franchise has held its satellite tournaments for the second year in a row in Kenya, South Africa and Nigeria. After a rousing success in Kenya (won by CM Wachira Wachania), South Africa and Nigeria held simultaneous tournaments thousands of miles apart. GM Maurice Ashley was on hand to support the event and was able to visit some of the local schools. 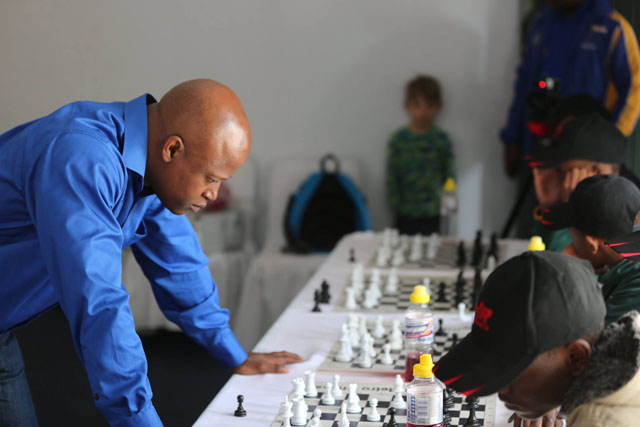 Set at Old Ed’s Sports Complex in Houghton section of Johannesburg, South Africa, the event would stage seven rounds plus a qualification for the top eight positions for the championships. Zimbabwean International Master Rodwell Makoto was the top seed followed by his Zambian counterpart, Daniel Jere. The Zambian jetted out with five straight wins including a win over Musatwe Simutowe and a nice win over Benjamin Hercules. 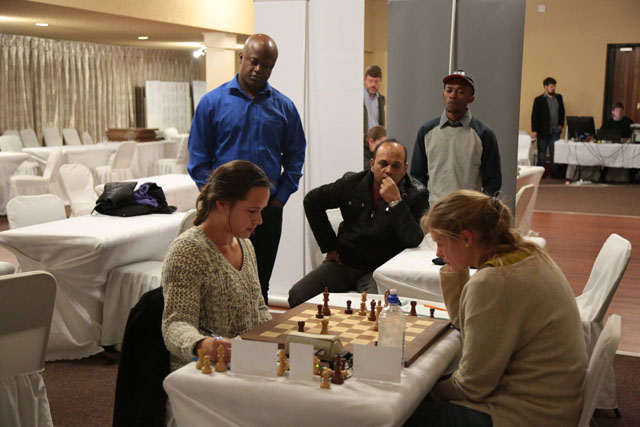 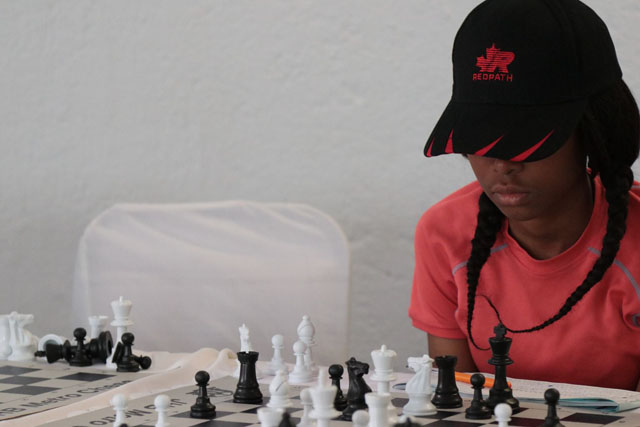 Chess definitely showed its good qualities among the many competitors. 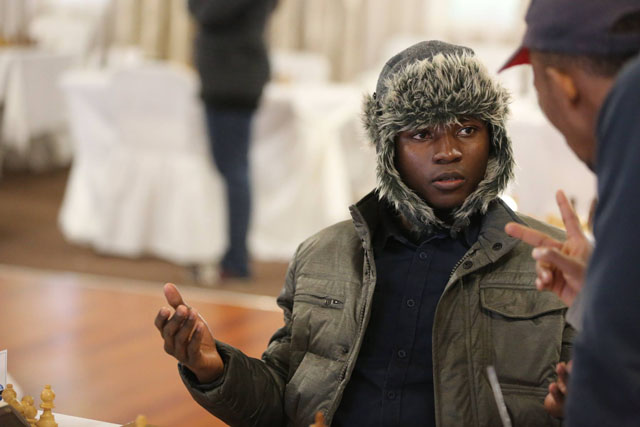 Providence conferring with arbiter… too cool inside perhaps?

Jere drew in 16 moves against IM Providence Oatlhotse, who dramatically won last year’s MC qualifier in South Africa. He sat on In a showdown of the two top seeds Jere facec Zim’s top seed Makoto. Almost immediately Makoto fell into opening preparation and lost a pawn. In the middlegame, white had his rooks doubled on the seventh rank and it appeared he would push for the initiative. The problem was that the extra pawn produced no tangible advantage and the game ended in a theoretically drawn position.

Jere gave up the half-point and finished the preliminary rounds on 6/7. FM Roberto De Abreu, IMs Ryan Van Rensburg and Makoto all had 5.5. Rounding out the top eight were: Hercules, Simutowe and Malawi’s Joseph Mwale. The playoff for the title was hotly-contested and Jere was nearly upended by Simutowe in the quarterfinal match. During the final moments of the Armageddon game, he got the win and moved onto the Semifinals. 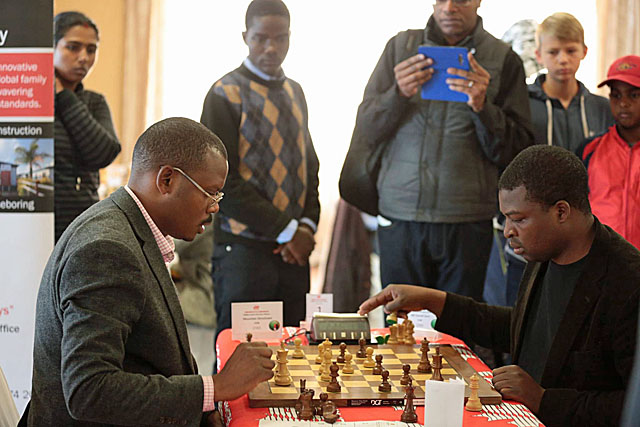 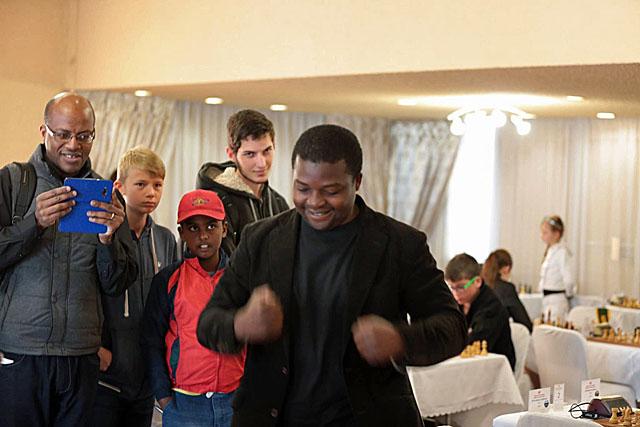 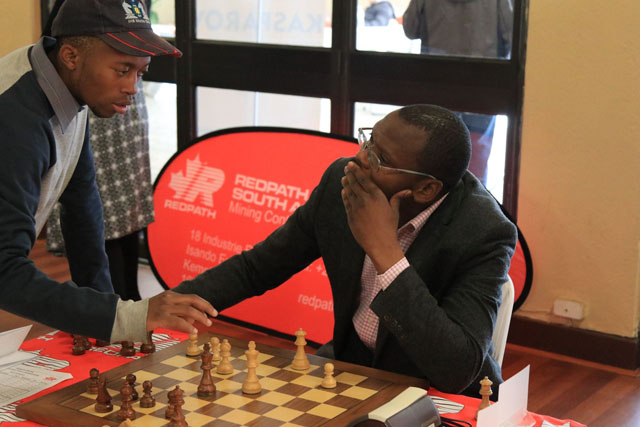 Musatwe Simutowe trying to figure out what went wrong in the critical moments.

Meanwhile, Makoto won his match against Hercules for another showdown. Makoto didn’t repeated his ill-fated choice of 4…Bg4 and played the common 4…dxc4. White scores well in this line and Jere seized the initiative once again. It appeared that Jere understood the nuances of the position better and pocketed a pawn after 20.Nb6. However, Jere erred with 30.g4 and allowed Makoto possible counterplay on the dark squares after his Ne5-g6-f4 maneuver. Jere held his position together and began to exploit black’s weak king. After 40.Rb8! Makoto collapsed and ended up losing his queen in the final position.

In De Abreu-Van Rensburg, white handed black the point when Hercules lost track of a piece. In the second game, De Abreu played a nice Benko Gambit, but his initiative petered out. Simutowe had a a thrilling match with Hercules and went through when the South African self-destructed in the Armageddon. Oatlhotse-Mwale also went the distance and the Malawian almost got the upset win needing only a draw on two occasions to advance. The Botswana came back with wins forcing the Armageddon which he won. 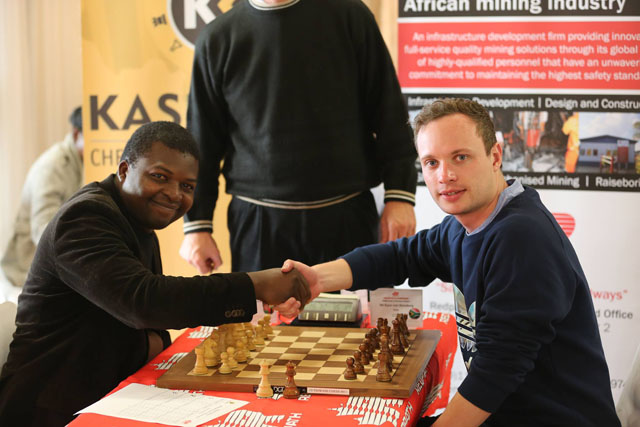 In the finale, it would be the South African holding homecourt (albeit as the underdog) against Jere who had only lost two games the entire tournament. Van Rensburg was also have a strong showing with a key win over fellow IM Oatlhotse. Ironically Van Rensburg had lost only one game in the tournament and was seemingly in good form. Would he be able to take down Jere?

In the second game, Van Rensburg got the kind of attacking position he sought, but in a critical position could have tried to confuse the Zambian with 24.Ne6!? but a draw would have been likely result in that variation. However, you need to give the opponent a chance to make mistakes in a tense moment. After 24.Ne4?? the game ended abruptly as 24…Bxd4 25.Rxd5 f5 nets a piece and Jere punched his ticket to Atlantic City for the Millionaire Chess #3. Congratulations! 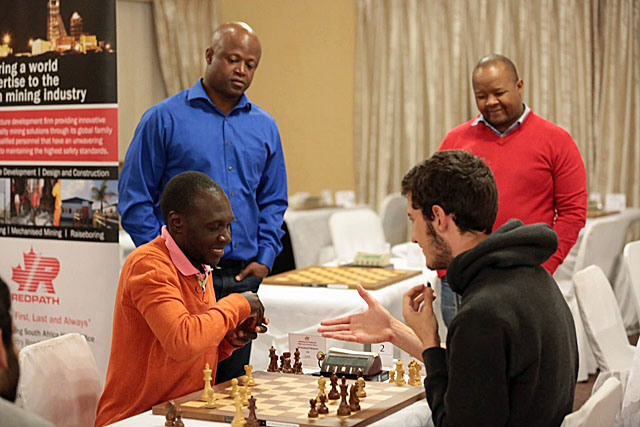 Finally… tournament is over! In the last game, to finish Makoto wins 3-2
over De Abreu. Great fighting chess throughout!

Kudos go to the Millionaire Chess and the Kasparov Chess Foundation for putting on a high-class tournament. GM Ashley’s presence added to the prestige of the event and it is hopeful that there will be many more MC tournaments on the African continent.