The Millionaire Chess Satellite tournament had thrills and spills as the tournament crown and spoils went to blitz tiebreaks after a three-way tie in nine rounds of play. IM Johannes Mabusela of South Africa had led through most of the tournament scoring six wins in a row before taking a short draw with IM Chitumbo Mwali of Zambia. Nevertheless, he was one point ahead of last round opponent IM Providence Oatlhotse with the white pieces and only needed a draw to win the trip to Las Vegas. 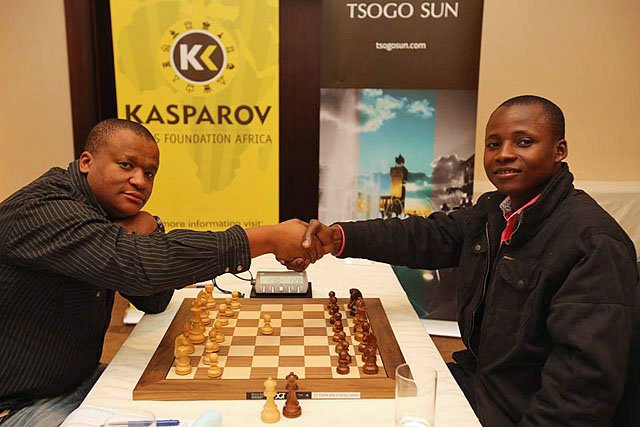 IM Johannes Mabusela and IM Providence Oatlhotse
posing before round #9.

In fact, it appeared that Mabusela was headed to Las Vegas when Chitumbo accept a seven-move draw from Benjamin Hercules to end on 7.5/9 in the last round. Meanwhile, Mabusela was gripped in a tense battle with Botswana’s IM Providence Oatlhotse in a Queen’s Indian. Mabulsela seemed to overextend his center with 15.e5 as play thereafter favored black.

After 28.Nd6?! black countered with 28…Nb4! and the momentum swung after 29.Bh7? Qc3! At this point two of white’s pieces were out of play as black pressed and ultimately won two pawns. The move 37…Bc5 would simplify into a trivial win. With Chitumbo’s brisk draw and Oatlhotse’s win over Mabusela, all three finished with 7.5/9 and would compete in a rapid playoff. Time control will be 10/10 + 10 seconds per move in a round robin format. 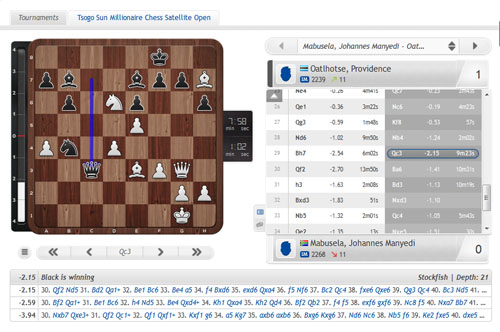 Position after 29…Qc3! turning the tide for black.

In the rapid, the play was fast and furious as the optimal results rolled in… Mabusela beat Oathotse, Oatlhotse beat Mwali and Mwali beat Mabusela! With yet another tie they would go to blitz. The format would be 5/5 + 3 seconds. Oatlhotse is very fond of blitz and it was certainly to his advantage. He showed his class in this format.

In the first game Oatlhotse-Mabusela, the game appeared to be headed for a draw before the board exploded. With both players playing on the increment, black’s king ended up in a mating net on the queenside! Mabusela goes from being a draw away from Vegas to relying on Mwali to keep hope alive. 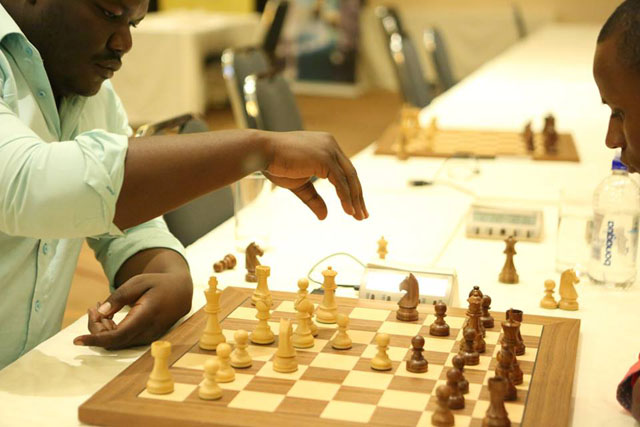 IM Chitumbo Mwali in the opening
against IM Providence Oatlhotse during the blitz finale.

In Mwali-Oatlhotse, white played the Alapin against the Sicilian and got nothing significant in the opening. In fact, a move order error allowed black to cripple black’s position and get a grip on the queenside. Black consolidated his advantage on the queenside and outplayed white in a time scramble. It was a smooth win for the Motswana player and his 2/2 score brought home victory. (see video of final minute) 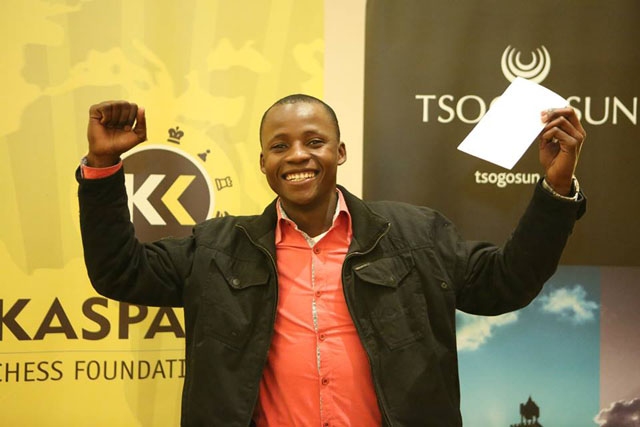