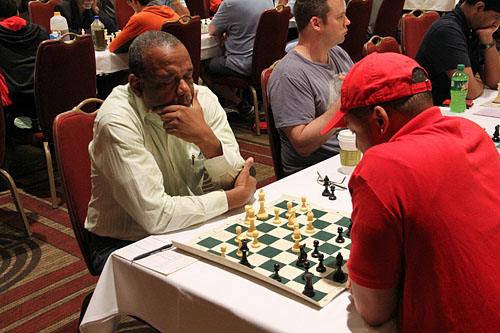 With the World Open only a few weeks away, we always seem to refer back to novel games of that tournament whether played on the very top boards or boards in the amateur sections. The tournament will take place in Virginia and draws a wide array of personalities. FM Philip Corbin of Barbados is perhaps known to The Chess Drum audience as the chess maven who made a career off of exciting attacking games including a memorable game in the 1985 World Open.

A few years back, he announced his retirement and ceded his long-held spot on the Barbadian national team to the rising stars of the country. In his impressive autobiographic book “Calypso Chess, he featured hundreds of his games, a tribute to his four decades of Bajan chess history. The affable Dr. Corbin, who is an electrical engineer by training, won the Barbados Championship seven times and represented Barbados 12 times (1986-2010) as a chess Olympian.

Corbin announced his retirement from international play and capped off his career by writing the aforementioned memoir. However, last year he came out of retirement to play in the 2014 World Open and played in the under-2200 section. In 1985, he produced a brilliant attacking game against Peter Chubinsky. Almost thirty years later he is back to his old tricks and shared several of his games with The Chess Drum. One is featured below.

The game featured is an “Elephant Gambit” of which Corbin is a connoisseur. This opening has become one noted by its shock value and it is captured on the cover of his book, “Calypso Chess” against Slovenian IM, Tadej Sakelsek. Last year against Abhishek Obili he bore his tusks in another miniature game. Enjoy!