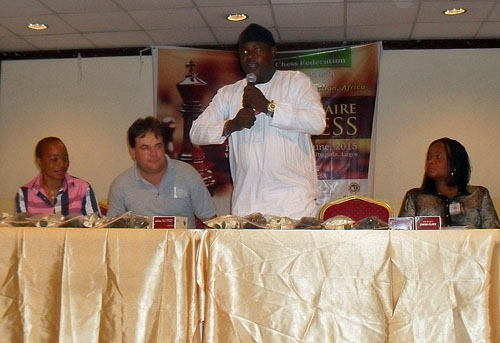 The second of three Millionaire Chess Satellite tournaments in Africa was held at Chevron Event Centre in Gbagada, Lagos. The nine-round content concluded in Lagos this past weekend with an exciting playoff. The first round of the Lagos Millionaire Satellite Chess Festival saw Hermann Manan from Cote d Ivoire upset top ranked Nigerian Eugene Unwana (2321), a sign that fierce fighting would ensue in the coming four days.

In the end, it would be one of the favorites IM Bunmi Olape to take the crown. He beat the unfancied Oluwadurotimi Lapite to win the all expense paid trip to the Millionaire Open this October. Missing was defending Nigerian champion Bomo Kighiga, but there was plenty of competition for the US$5,000 first prize. The following report was filed by Kasparov Chess Foundation Africa.

Coming into the event, no one would have picked unrated Oluwadurotimi Lapite as one of the favourites but he pulled of an impressive round 9 win against top seed and then tournament leader CM Eugene Unwana (2321). This win forced a play-off with IM Bunmi Olape (2227) as both players ended with an impressive total of 7/9. 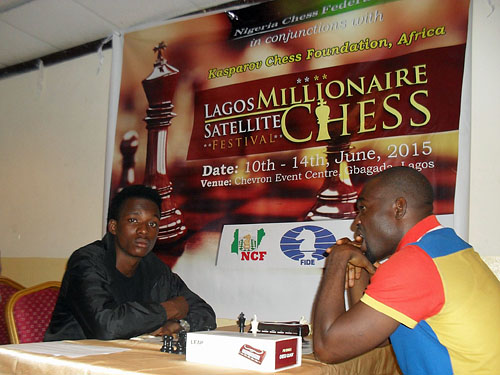 The tension was fierce! 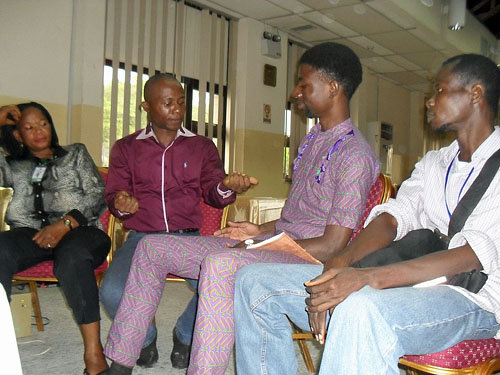 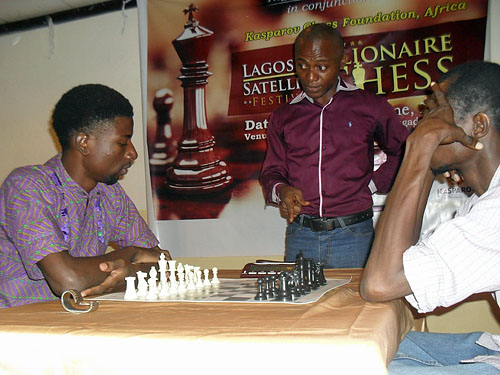 Lapite Oluwadurotimi and IM Bunmi Olape about to battle
for the overall 1st prize. Olape won the mini-match 1½-½.

The first playoff game was drawn, but the second was finally decided when Lapite lost on time in an otherwise equal position. This handed his opponent the hard earned title as well as a trip to Las Vegas to participate in the main event in October. Bunmi will hence be joining FM Harold Wanyama from Uganda who won the inaugural event in Kenya earlier this year.

The tournament turned out to be a major success and saw almost 150 players participating across the various events. The result is also expected to see runner up Lapite comfortably enter the Nigerian top 10 as he is expected to earn an initial rating of 2248 following his impressive debut. With no less than 19 previously unrated players participating, the event will no doubt provide many other players with their first ratings as well.

KCF would like to thank the Nigerian Chess Federation as well as the Chevron Event Centre which hosted the tournament for their hard work in putting on another excellent event. Final standings from the tournament are already available at https://www.chess-results.com and PGN copies of all games from the main event will be uploaded to this same site shortly.