Just when we thought yesterday’s round couldn’t be topped for its excitement, we had round seven! Ray Robson almost evoke heart attack while allowing his clock to whittle down to seconds. You could hear the commentators counting down… 3… 2… 1! A player known for his chronic woes with managing his clock, Robson took this to a new level against a beleaguered Daniel Naroditsky.

The world’s youngest chess author in history has been having a horrible tournament, but was hoping to get back on track against a surging Robson. It was a Grunfeld Defense which Robson has explained he took up as eschewing the King’s Indian. The critical moment of the game was after 30.c4 when white was trying to conjure up play on either wing.

While Naroditsky did succeed in invade the queenside he may have missed 35…Rb1! as the initiative swung in black’s favor white tried to bail out with endless checks but black had all the trumps. Nevertheless, Naroditsky had chances after black’s fancy 53…f3 54.g4! Now it was white who was looking to attack the cornered black king. It was around this time that Robson ran dangerously close to forfeiting on time.

At one point it was reported that he was down to one second. It appears that white has a draw after 57.Qf8+, but decided on 57.Qh8+ and in the flurry of moves to follow, the black queen was able to provide sufficient protection. Devastating loss for Naroditsky who was close to snatching the half-point.

If this is a sign of things to come, then U.S. chess will be competitive for a long time. Sevian-Nakamura featured the prodigy of today with the prodigy of the past. Sevian has broken all the records that Robson broke of Nakamura’s who broke all of Bobby Fischer’s. Make sense? Nakamura never got much out of this game although he played in his usual energetic style. However, as the game wore on, he was unable to create the imbalances needed to go for the initiative. Good game for Sevian.

So-Onischuk saw a Marshall Gambit which doesn’t seem to be the Ukrainian’s style. There was twists and turns in this theoretical battle, but black somehow lost the thread in what was a relatively equal position. The crucial position occurred after 29.Rxd4 when an attack on f7 loomed. Black played 29…Be7 and after 30. Nf3 black erred with 30…Bb1? which loses material. The win put So back into contention one-half point out with four rounds to go. 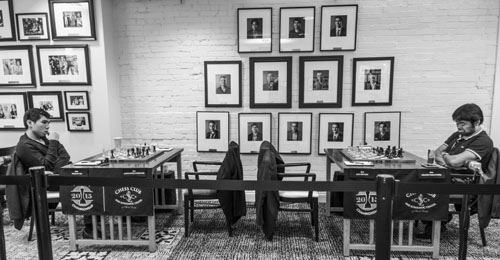 So still has Nakamura in his sights.
Photo by Lennart Ootes.

Gata Kamsky is also trying to scratch his way back into contention after dissecting Conrad Holt in a technical win. In this game, white extracted a slight advantage going into the endgame, but the bishop pair gave white some initiative. Black marched his king all the way back from c8 to g8 and soon found that his abandoned queenside was being raided! White cut the black king off from protecting the queenside and after 55.Rg7! all of black’s pawns will be gobbled up.

Another tough game for Varuzhan Akobian who was still trying to recover from his loss to Holt. Against Kayden Troff, he faced a topical line in the Grunfeld, but forgot an intermezzo 24…Bxa4+ which ultimately gave black a much better structure in the ending. Troff converted very smoothly. Troff has made an impression and certainly one on Akobian today. 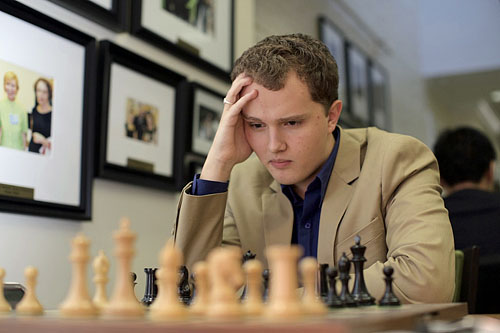 This has been a breakout tournament for the Utah native, GM Kayden Troff.
Photo by Lennart Ootes.

Shankland-Gareev showed another eccentric opening by black as he opted for the Schleimann Defense after 1.e4 e5 2.Nf3 Nc6 3.Bb5 f5!? The opening does not have a good reputation, but it can be used effectively for “shock value” and does have some venom. Gareev had played 1.d4 Nf6 2.g4?! against Shankland at the Hawaii Festival.

Black sacrificed a pawn early but seemed to play carelessly as white pieces became more mobile. White had a number of tactical threats that took advantage of black’s weak back-rank. As pressure increased it appeared that black would be able to hold on but the niggling back-rank threats remained and would be to his undoing. In the final position, black is forced to donate a piece to cover the back rank threat.

Katerina Nemcova is continuing to apply pressure to the field with yet another win, this time against Apurva Virkud. This game started 1.e4 c5 2.b3!? a rare line that seeks to sidestep main lines. Nemcova probably saw that Virkud knew how to handle main lines very well and just wanted to let her experience shine through. 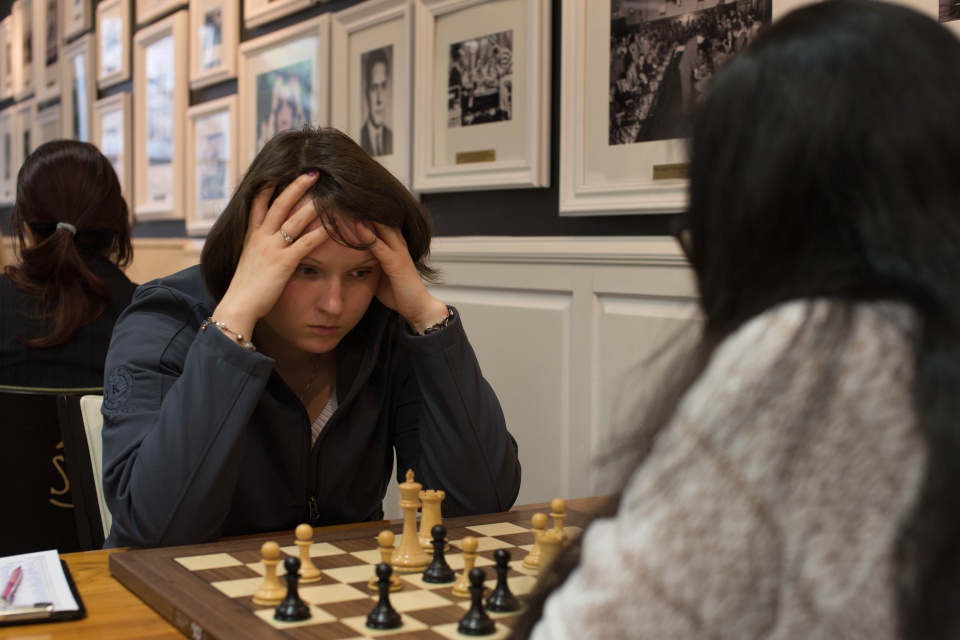 Nemcova has played the best chess in the tournament… by far.
Photo by Lennart Ootes.

Virkud equalized rather easily, but after the queens came off started making slight positional mistakes. After move 30, white was tightening the vice like a boa constrictor and black resorted to shuffling pieces back and forth. White rooks penetrated and she sacked an exchange to get the other rook onto the back rank to cut off the king and rook simultaneously. After 52.Rh8, black is forced to return the exchange, but with her other fianchettoed rook, her position became hopeless. She had to donate more material to free the rook and it was simply too much to ask.

Chasing Nemcova was Irina Krush who conveniently dispatched Annie Wang in short order, but was the butt of jokes for missing a simple tactic in the opening. Krush played 11.Bxe6 which should give her a lasting advantage, but when black played 11…fxe6?? Krush could have won piece with 12.Qh5+ and 13.Qxc5. Actually a pretty bad sign of blindness. She took it is stride saying that if she had taken the piece she would not have had the satisfaction of playing such a strong positional game. Perhaps she had a point since Wang showed absolutely no understanding of the position.

Soon Krush was slowly tightening the screws and Wang ended up blundering into a mate. Since her opening win against Abrahamyan, Wang has spun out of control mustering only one draw and five losses in last six rounds. The fans watching had pity, but all can attest that this would be a learning experience. The question is whether such a performance makes a young player more motivated or less motivated. Playing such strong players every single round can be a tall order for inexperienced players.

Goletiani-Sharevich could be considered a mild upset considering the way both have been playing. Goletiani had been on a role and was only one point back, but this loss may damage her chances with four rounds left. White opted for a type of double fianchetto Reti opening and got nothing special. In fact, black could have snatched the initiative with a deft exchange sacrifice 29…Rxd2! but retreated and allowed white a chance at the initiative. The game got crazy as pieces started flying about the board… several pieces were hanging.

Amidst time pressure, there were a comedy of errors including several missed wins by both sides. Black replied with 39…Qd8 and white immediately played 40.e4?? to make time control. If one looks at this position, there would no way to figure white should lose, but the last move cuts off the the bishop from defending the king. After the calm 40…Qh4 white was being mated!! Goletiani must’ve had a sinking feeling and took 23 minutes before playing 41.g5. However, the ending was brutal and swift after 41…Bxe4+ 42.Kg1 Qxg5+ 43.Qg4 Rg2+ mating. Amazing swindle!

Sloppy play may be the result of fatigue creeping in as players having to play with such intensity every game takes its toll. One of the more tame game was actually a Grand Prix Attack in Ni-Abrahamyan. The game did not have much of the swashbuckling tactics and ended with a perpetual check. On the other hand Paikidze-Melekhina was an English that exploded mid-game with heavy pieces trolling the board.

There were a couple of shots missed in the tactical slugfest, but as pieces zipped across the board it was black’s king that was more vulnerable. Melekhina went after the white king in time pressure, but it merely took her pieces away from the defense of her vulnerable king. She took 16 minutes before playing 41…Qf6, but after 42.Rb8! the game was over due to danger on the a1-h8 diagonal. The game ended 42…Qh6+ 43.Rh4 Qg6 44.Rxe8+ Qxe8 45.Qe5+ Kg8 46.Rg4+. Disappointing loss for Melekhina.

In Foisor-Yu, the junior player was close to winning. Fast forward to 39…Ra8. The position is completely winning with two pawns to the good, but it is difficult to advance them. Once the queens were traded, it took a bit of technique which Yu failed to show. White was able to build a fortress despite the two-pawn deficit.