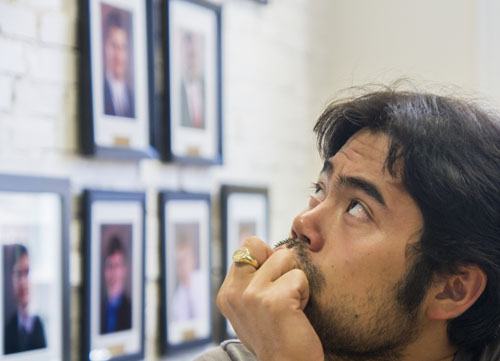 Nakamura taking a glance at chess history of which he is a big part.

Kayden Troff got an idea of what it is like to play a 2800. There wouldn’t be any swindles today and America’s top player showed his mettle.

(Editor’s note: Perhaps we are becoming frustrated with Hikaru Nakamura’s harsh self-criticism… deeming his play “moronic” and “idiotic”. Although he was a bit harsh on his play, he uncorked a novelty and dominated for the most part. However, when you’re 2800 the standards of of a different level and it may be hard for the average player to imagine because he keeps winning… and he beats elite players too! Nevertheless, Nakamura opines that if he is playing at this level against Magnus Carlsen, Levon Aronian, or other elite players perhaps, he’d surely lose. We’re not buying it.)

Now about the other games…

The game of the round was Holt-So with white facing yet another Grunfeld. This game took a sudden turn on move 14 as So sacrificed a piece with 14…Bh5 15.g4. Black would have two pawns for the piece plus his opponent’s weak king. However, white’s two bishops was able hold the position and frankly, black’s attack has no steam. So ended up sacrificing another exchange, but white defended a gave Robson his third loss of the tournament. Improbable result by So who was looking to make an impression in his first U.S. Championship.

Robson-Shankland drew a game of two French Defense aficionados. Akobian-Kamsky was a friendly draw as well. It seems like it was all played before. Another short game was Gareev-Sevian, but it certainly was not a draw. This demolition cooled off Sevian who had probably started to gain confidence. Gareev played the Trompowsky Attack, an opening that he mentioned he played because of an inspiration from a 2200-Elo player. Wow.

Sevian snatched the b-pawn with 4…Qxb2 and tried to run and hide, but white got a dangerous initiative after 11.h4!? Then came the double pawn sack with 15.e5! dxe5 16.d6! exd6 17.Nce4. The game continue with a blistering attack and by the time 20.f5 was played it was too late to stop the attack. Black blundered with 20…Nf6 and it seemed that every move white played gained time and tempo. Black sacked the queen for three pieces, but the king was too exposed and it only prolonged the suffering. None of black’s queenside pieces had moved an inch. That is often what happens to “pawn grubbers” taking poisoned b-pawns.

It goes without saying that many cringe at seeing Daniel Naroditsky in such pain. The talented young man whose chess skill seems to have grown along with his height has had a rough go and it did not get easier with another tough opponent. Imagine having to play Alexander Onischuk after losing a heartbreaking game to Ray Robson. In this game, something went wrong with black’s overall strategy and his bishop on b7 became an instant target after 19.c5. After 20…Ba8, the bishop never moved again and black was effectively down a piece. 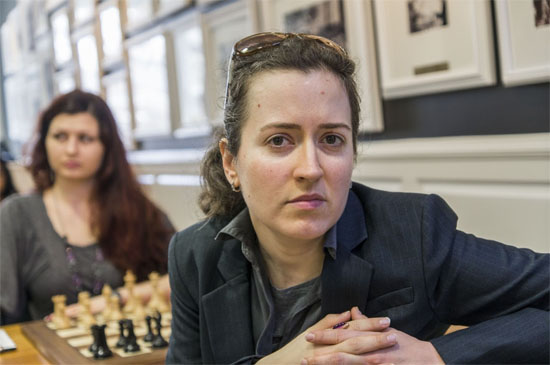 Krush still in hot pursuit of the leader.
Photos by Lennart Ootes.

Irina Krush is now within one-half point of the lead despite being relatively out of form. Krush defeated Alisa Melekhina in her pet c3 Sicilian after weathering aggressive intent. However, white’s center became overextended so black decided to sacrifice an exchange for a pawn. Melekhina seemed a bit unsure and dawdled a bit in finding a coherent plan. Black snapped off another pawn skewing the white rooks and winning the exchange back. White tried to get some counterplay on the exposed king, but black finished the game off with a deft mating combination.

Nemcova-Foisor was a fairly equal battle throughout and there was not much risk taken by either side. Abrahamyan-Paikidze was also drawn, but was a marathon of a battle out of a mainline Caro-Kann. The game got complicated in the middlegame with white pawn storming the black king with 20.g4 and 21.g5. Black had ideas of her own but threw caution to the wind and sacrificed a piece! As the game wore on, black was getting none of the compensation hoped for and the situation looked dire. However, white went for a three-fold repetition since she couldn’t figure out how to prevent checks to her exposed king.

Rusudan Goletiani rebounded from a loss yesterday in a walk-over win against Annie Wang. Wang missed a tactical shot 23…Nxg3! winning on the spot. When the smoke clear black was down three pawns and an exchange. It was amazing how quick the game deteriorated. Wang has now lost six games after an auspicious start against Abrahamyan.

Virkud-Sharevich opted for a slow positional battle. The sham sacrifice 31…Bh3 did not ruffle the features of the young player and she calmly ignored it. The game did not have much of an imbalance and was quietly drawn. Jennifer Yu was on the wrong side of powerfully played game by Victorija Ni.