Today was perhaps the wildest round yet! There were mates on the board, blunders into losses, blunders into draws, interesting motifs, but it was the day of the rook. In the women’s section, the rook played a prominent role in all the decisive games including the thrilling battle of Sharevich-Krush.

Throughout the game, Krush was in command and was moving the menacing pawns up the board towards glory. Looking at diagram on the right, Krush had played 41…Nd2 in order to promote the pawn to a new queen. The commentators were analyzing 42.Rd8 which would have lead to a spectacular draw after 42…Rxd8 43.e8(Q)+ (43.exd8(Q)+ transposes) Rxe8 44.Rxe8+ Qxe8 45.Qxe8+ Kg7 46.Qe5+ with a draw. So the fans went beserk when the camera showed Sharevich play 42.Rxg6+??

According to Sharevich, she had the idea of a perpetual draw in mind and Krush perhaps saw the same line, but could have snatched the full point with the unlikely 42…Bg7! What was strange was that Krush immediately took the rook and perhaps did not consider the winning move. A very disappointing game for Krush who had her share of chances, but continues to struggle to find her form. Sharevich gave her thoughts after the game and was surprised to learn that 42…Bg7 was winning for black!

The marauding rooks showed up in Yu-Nemcova when the young junior walked into a mating net. The game followed a main line until Yu deviated with 9.Nxe5 instead of 9.Bg5 or 9.d5. As play wore on, it was clear that the tournament leader was in for a fight. Black systematically broke down white’s already broken pawn structure with a …g5, …f6 battering ram on the e-file.

There have been several comments by women players about the temperamental play of women in general. Is this true? Are women more unstable in terms of chess decisions? Perhaps, but that may not be the only reason that the games in the women’s section have such volatility. On the other hand, Wang-Paikidze showed tremendous fighting spirit of the youngster in holding the draw after 102 moves.

One game that showed the difference between the seasoned player and the inexperienced was Virkud-Goletiani. White allowed black a dream position after 15…b5! followed by the ambitious 16…Bxd5! Black was firmly in control after that ultimately got a crushing rook attack on the queen-castled king. White’s kingside pieces were flat-footed the whole game.

In Melekhina-Ni, white faced an enterprising sacrifice that Ni said was prepared by her Belorussian husband Yury Shulman. At the least, it managed take white out of preparation. the 1.e4 d5 2.exd5 Nf6 is sometimes met by the 3.Bb5+ line, but the game continued 3.Nc3 Nxd5 4.Bc4 c6 5.Qf3 Nd7!? a novelty. In ensuing play, it doesn’t appear that black has enough compensation for the pawn, but in the game, black slowly gains momentum. In trying to wade through the complications, Melekhina began to feel the pressure and overlooked the tactic 28…Qxe5 netting black a piece. In fact, black ended up getting a mating attack by (guess which piece) the rooks.

Finally Abrahamyan-Foisor was a positional Ruy Lopez where not even a pawn was traded until move 27. By move 35, two rooks and two minor pieces remained with six pawns for each side. White’s pieces were better placed. Black tried sacking a piece to loosen the vice grip on the position, but white’s pieces were well-mobilized and it would not be easy for white to trade off the pawns. White trapped the king on the 8th rank and the opposing monarch rushed to deliver the coup de grace.

In the men’s group, there were four decisive games with Robson-So being the headliner. The two young GMs were roommates at Webster University and battled in the final of the Millionaire Chess Open. Both took a combined $150,000 (So $100,000 – Robson $50,000) which was captured in a famous photo. However, it was all business today.

The Berlin Defense was employed by So and they reached a very dynamic position with pairs of bishops zipping around the middle of the board like missiles. In a critical moment, black essayed the queen sally of 26…Qh4 after which white found the logical and probably necessary 27.Rxe5. While the engines, give a slight plus for black, white has more than enough compensation…three passed pawns to boot.

Ultimately, black had to give the exchange back for a pawn, but white had advanced the a-pawn deeply. In order to stop this pawn, black had to blockade with the rook and with 42.Bb7 it became entombed. Black resigned as the white king would merely walk over to the b6-square and force the rook to fall on the sword. So has had a rough going losing a second game and tumbling down the ELO ladder.

Nakamura-Shankland and Gareev-Naroditsky were relatively short draws reaching the minimum limit for moves played before a draw can be agreed. Troff-Sevian featured the future of American chess. Their game featured a very unbalanced position as youngsters these days seem to be eschewing positional principles for unbalanced complications. The game was totally insane. White sacrificed an exchange to get passed pawns rolling up the board, but black found some accurate moves to stop the pawn and forced simplification into a winning ending. 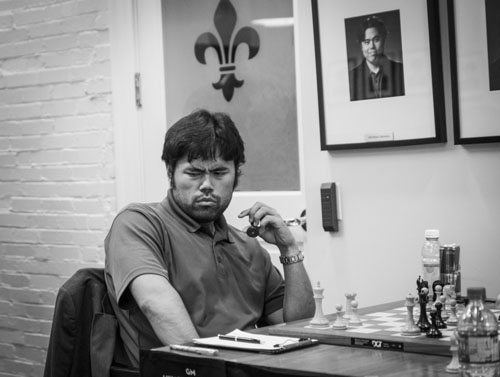 Interesting contrast of expressions for Nakamura.
Photo by Lennart Ootes.

Holt-Akobian saw a gross blunder, but this time it was not Holt who was the victim, but the victor. This game started out tamely and then exploded in the middlegame. Black’s king was fished out into the center of the board and Akobian hunkered down and clustered pieces around him. However, black overlooked a combination after Holt’s Petrosian-like 46.Qc1. Retreating moves are often the easiest to misunderstand and after 46…Rg6 white banged out 47.Re8+ Kf6 48.Qf4+ netting a piece. Black resigned a few moves later.

Onischuk-Kamsky was a game between two veterans and positional maestros. White ultimately got a grip on the position and kept increasing pressure. The game went into a double rook ending with white having the better pawns and king. In the end the passed e-pawn and white’s king were able to outmuscle the lone black rook and Onischuk was able to get the full point.