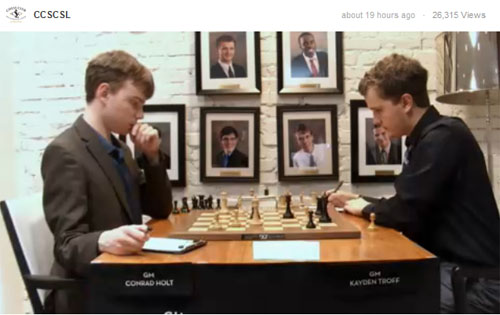 A ‘what just happened’ moment occurred in Holt-Troff.

Every chess player has experienced the pain of a loss. Even worse is the pain of losing a game that you were perhaps a move or two away from tasting the sweetness of victory. Of course chess isn’t so easy. A famous Grandmaster once said that forty strong chess moves can be nullified by one bad move. Thus was the case in Holt-Troff. This is a game between two players who have been competing against each other since junior days. Amazingly, Troff had a 4/4 score! In this game it appeared that Holt was going to break the streak after Troff went horribly wrong in a Grunfeld Defense.

After the enterprising 12…Nxf2?! black was “all in” for an attack, but after 13.Qa4 Qxc5 14.dxe6 black was already completely busted. White played the tempting 16.Bc7?! (better was 16.Qa3! with 17.Be3 in mind) which while strong allowed black to stay in the game. Jennifer Shahade pointed out during the game that it is often difficult to choose between moves when one’s advantage is so overwhelming. Objectively speaking, Holt was winning up until the point of his final blunder. The issue now was king safety, a motif that would come back to bite him.

Out of desperation, Troff started giving checks to the white king. Generally, the idea is to hustle the king to a cubby-hole to hide. After 42…Ne3+, Holt played 43.Kh3 and after 43…g5! there was a sinking feeling that we all get when blowing a position. Facing mate or loss of a rook, a shell-shocked Holt stared at the board and played moves out of reflex. 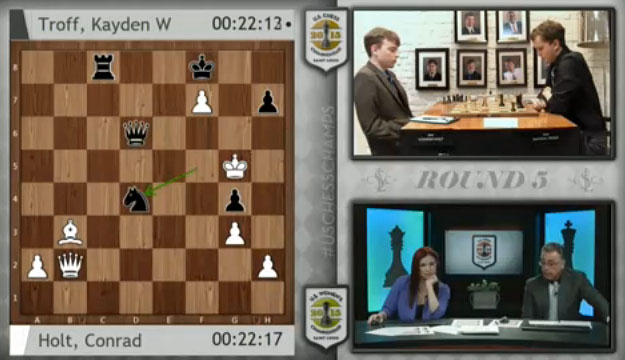 A dejected Holt stares at the board in complete shock…
and so was the commentary team of “Jen and Yaz”.

After resigning, Holt quickly bolted the board in disgust. Heart-breaking for the UTD graduate student. Here is what a bewildered Kayden Troff had to say:

Perhaps the game that created the most excitement was Nakamura-Naroditsky which saw a mainline Sicilian Dragon (with …h5). This line has been played hundreds of times at every level of chess. It still has a few adherents at top level, but it is so concrete and over-analyzed that it is hard to find original ideas. However, Nakamura was up to the test.

He opted for the 10…h5 line which has gone in and out of vogue over the past 30 years. Nakamura uncorked the thematic exchange sacrifice with 14…Rxc3! devaluing the white pawn structure and increasing the strength of the “dragon bishop”. Naroditsky had a material advantage, but for white these positions are difficult to play since the g4 ideas are no longer an option. What does white do?

After 24…Nc5! black now had full compensation for the exchange and the tide was turning. Naroditsky gave the exchange back trying to take advantage of black’s centralized king after 32.Bf6. It turns out that black had seen a bit further… 32…Ne4 33.Nxf5 Bd3! all of white’s pieces are in jeopardy. On 34.c3 Rc5! 35.Nxe7 Rb5 white had seen enough. Nakamura maintains his lead over the field as Wesley So also won his game.

So-Gareev did not see an eccentric opening by Gareev, but a solid French Defense. However Gareev did test the waters with a provocative 9…h5!? not a typical French idea. Black had to castle by hand and later sacrificed a pawn to activate his king rook. The game went into a Q+N ending with white shepherding that extra pawn… and another. He also claimed the point. It was not an impressive victory, but one that keeps So in striking distance of Nakamura.

Kamsky-Robson saw the youngster go down for his first loss. Kamsky eschewed his London System for a mainline QGA. However, white got a picturesque attacking position with the center closed and pieces aimed at the black king. There was a queenside skirmish, but the attention fell back on the kingside as white tried to pry the black cover open. Robson panicked with 31…Kh6 which was rudely punished with 32.Ne4! Nd5 33.Bxd5 exd5 34.Rxd5 Rd8 35.Nf6! The finish was crisp.

Shankland-Sevian was a Guioco Piano that didn’t offer much except for a few tactical nuances which leveled off very quickly. Akobian-Onischuk was a theoretical Nimzo with some positional nuances but the pieces came off rather quickly and there were nothing left. Akobian made some very interesting comments about the state of American chess. Not long ago he was a rising star and now he is paving the way for the younger players.

In the women’s competition, Katerina Nemcova held her lead by drawing with one of the pre-tournament favorites Tatev Abrahamyan. This was a rather quiet game out of the 4.Qxd4 Sicilian. This offbeat line has quite a bit of venom if black simply plays normal moves. Nemcova steered away from the main lines and played 6.Qd3?! instead of the normal 6.Bxc6 Bxc6 7.Bg5. However, the Maroczy Bind that ensued is similar to other options in this line, but white wasted a tempo with 6.Qd3 when she could’ve opted for 6.Bxc6 Bxc6 7.c4!? There was never anything in this game for white as black equalized easily. 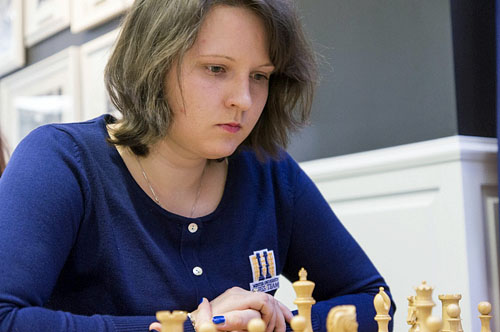 Krush-Goletiani was a type of Bogo-Indian Defense that turned into quite a swashbuckling affair. After normal moves, the game took a turn when Goletiani unleashed a powerful attack with 12…Nfg4 13.h3 Qh4!? White seemed to have enough protection as long as she doesn’t accept the sacrifice. However, black kept coming after 14.Nf4 g5! 15.Nfd5 f4 when things got critical in a hurry.

Goletiani got her chance after Krush played 19.Rae1?! Bxh3! (19…Nf3+!! was even stronger) At this point Krush stated that she underestimated the power of the idea. Perhaps Goletiani overestimated her chances and instead of recapturing the rook with 22…dxe5, she went for the gusto with the tempting 22…Bxg2? Krush threw a monkey wrench in these plans with 23.Rh5! and when the smoldering board cleared from time pressure smoke, black’s attack was parried. Not only that, black could not calm her mind down and kept trying to exact an advantage.

After 33…Qa3 her king was now in danger! How quickly things can change! Black’s exposed king was soon facing three attacking pieces and the lone rook was not enough to ward off the swarm. The rook fell on the sword and white simplified into a winning ending. Energetic game!

While Paikidze-Sharevich took the day off with a tame draw, Foisor-Melekhina went 90 moves until black finally held the draw. White actually had a chance after 71…Qe8 72.Qd6+! but in time pressure it is difficult to see any ideas. After that black defended perfectly and saved the half-point.

The scholastic players Yu-Virkud had an interesting battle. It is not known if they had met before, but they were certainly familiar with each other. In this game, black seemed to play with more decisiveness at critical moments. Nursing a passed c-pawn, black had many trumps not the least of which was control of crucial queenside files. However, after establishing a winning advantage, Virkud made a mistake with 43…c2 when white could have set up a nice blockade.

In the diagrammed position, white missed her chance to meet 44…Kc3? with 45.Ne1! She found the idea a couple of moves later, but the difference was the white king was already driven off of crucial squares due to black’s Nb6-c4 manuever. White had to donate a piece and the rest was easy for black. Lastly, Ni-Wang was a relatively one-sided affair in the Catalan. It is safe to say that Ni had control much of the game and deserved the win. Wang was simply outplayed and dominated. There were no forking or drawing tricks in the end.