Round #4: All draws amongst men… more bloodletting amongst ladies. 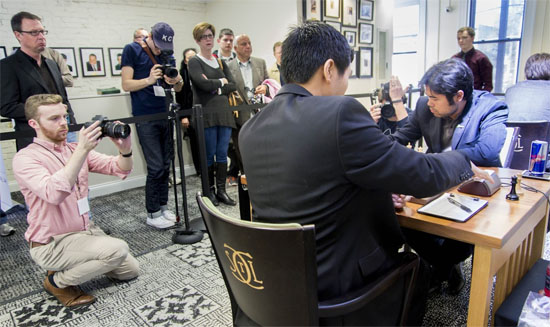 The So-Nakamura battle was highly anticipated.
Photo by Lennart Ootes.

In the overall championship, there were all draws today. It is the first time and perhaps one would think that players are being cautious. However, there were some very exciting games including Nakamura-So which had a critical moment after black’s 31…Nf3+! After this shot, white treads carefully with 32.gxf3 Qxf4, So is winning a pawn. It turns out however, that this game goes right into a drawn rook and pawn ending. Tense moment for Nakamura, but he held very easily.

Several of the games were rather placid, but not so in the case of Gareev-Kamsky. The Uzbek player trotted out the Sicilian Wing Gambit with 1.e4 c5 2.b4!? probably a first in over 2600 play. There is a slight variation with 1.e4 c5 2.a3!? and 3.b4. Gareev played 1.h4 and 2. a4 in Hawaii Festival and earlier in tournament played …h6 and …g5 so maybe his blindfold prowess is affecting his openings. 🙂 This game certainly became murky and entered a tactical landmine with a share of mistakes on both sides. In the end, white had chances but it would not be enough and the game petered out to a draw. 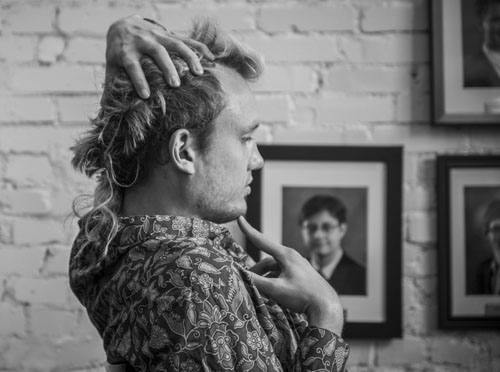 Timur Gareev has taken his eccentrism to a new level. Today he essayed 1.e4 c5 2.b4!? against the ultra-solid Gata Kamsky… and almost won! Photo by Lennart Ootes.

Onischuk-Holt was an interesting game where white held the positional advantage for nearly the entire game, but could not find a path to victory. Troff-Shankland did not offer much in the way of a discussion in the Queen’s Indian. Sevian-Naroditsky saw a Marshall Gambit that had a long prepared line, but it is uncertain why such a forcing line is played if not to exact an advantage. The play was concrete and there was not much except a three-fold repetition.

More bloodletting today in the women’s group with 4/6 decisive. When Katerina Nemcova was asked earlier in the tournament why there were so many decisive results in women’s play she mentioned the disparities in level of play and also that women cannot hold such level positions for an extended time. Whatever the reason, perhaps a study can be done here.

Goletiani-Paikidze was a draw, but quite an exciting encounter. The game waded into equal terrain, but by the 30th move, there were a couple of pawn sacrifices that sparked counterplay for black. Nevertheless the game petered out into a book draw with white’s extra a-pawn. Melekhina-Nemcova was another anti-Sicilian trotted out by white… this time the c3 Sicilian.

Unfortunately, white feel into deep, deep trouble trying to press on the kingside and black turned the tide after 30…g4 31.Ne1 g3! Stockfish evaluation was at -3.78, but increased to an improbable -8.31 after white’s 35.Nf3. Now one cannot simply look at the eval to determine the position, but black missed several opportunities to apply more pressure. The game went to a winning rook ending and white blundered with 49.g5? hxg5 50.hxg5 and now the a-pawn would decide.

In Virkud-Krush, the defending champion took advantage of the lack of experience of her opponent in this line, quickly equalized and slowly outplayed the young star. In the end, Virkud missed a tactic in time pressure tossing a piece with 37.Bf3?? Qxd4 when 38.Qxd4 Nb3+ 39.Kd1 wins due to the intermezzo 39…Bxf3+. Here was Krush’s comments after the game:

Abrahamyan-Yu was a Philidor, a defense with a poor reputation and almost never seen at the highest level. Abrahamyan decided to simply play chess and adopted 6.g3. This was another case of the more experienced player understanding the position better and she ground her down at move 60. In Wang-Foisor, black equalized with no problems after a strange opening choice by white. As was the trend in this round, the more experienced player slowly outplayed her opponent and the game was essentially over at move 25. Sharevich-Ni was a see-saw battle where white was winning then her advantage evaporated. After obtaining a winning position, black dawdled with 64…Kb6 when 64…Rxc4+ would have done. After 71.c3 the game was dead drawn.