“On the Beat” with MC’s Amy Lee

The Chess Drum was able to catch up with Amy Lee who is busy strategizing for the Millionaire Chess Open to be held from October 8th-12th, 2015. Leading up to the March 31st $1,000.00 deadline, there is quite a bit of optimism about the numbers and there are rumblings that a number of players will join including some headliners.

In recent news, MIT Media Labs has released a promotional video on their work to make chess more marketable. This presentation of chess was rolled out in MC#1 with “analytics” and will be on full blast at MC#2. It provides excitement and allows fans and even non-chess onlookers to understand the flow of the game. The quest to make chess more marketable continues and Grandmaster Maurice Ashley is certainly the right person to weigh in on the debate. This is one of the main missions of Millionaire Chess.

“Anyone who plays in our event should expect first class service.”
~Amy Lee

Ms. Lee answered a few questions for The Chess Drum audience about the progress and the second edition. She reports that there are more than 350 entries compared to 126 last year at this point. Top players have joined the fray such as Hikaru Nakamura, Wesley So, Wang Hao, Yu Yangyi, Francisco Vallejo Pons, Le Quang Liem, Alexey Dreev and Evgeny Najer (European Champion). While Samuel Sevian is the latest GM to enter he will join a cadre of talented young stars in the field such as GMs Ray Robson (runner-up MC#1), Sam Shankland and Illya Nyzhnyk. There have not been any headlining women besides Grandmaster Irina Krush, but there are prizes for “top female” in five of the sections. 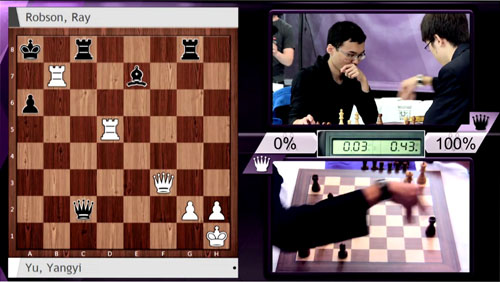 “Analytics” are used in most major sports. Is this the future in chess?

When asked about the satellite tournaments, she mentioned that the tournaments have been slow to build, but there are three scheduled for Africa… Kenya, Nigeria and South Africa. Ms. Lee believes that such an idea will take time to take hold, but has confidence that it will become an important feature in drawing more interest. One of the other developments that may draw interest are some of the new prize categories.

The MC franchise has started an affiliate program designed to give websites a chance to publicize the event while also giving a chance at revenue-generating opportunity.

While we expect lots of people have already heard about our event, we wanted to give various websites the opportunity to spread the word about the tournament. Going global has always been our vision, and our affiliates will help maximize the reach of MC.

(More about the affiliate program here.)

As far as the entertainment value, Ms. Lee wasn’t ready to reveal any new ideas, but she guaranteed first class service with the same flair that made the first edition such a success. When asked if she was going to begin playing in chess tournaments, she said, “Maybe this year!” She quickly retracted with, “Of course, I’m kidding. No one wants to see me play. I’ll keep doing all I can to promote this great game and leave the playing up to the stars.”