Majur Juac’s story is the kind that often go untold in chess.

Many of those in the American chess circuit may be oblivious to the hundreds of wonderful life stories that can be told by chess players at any given tournament. The travesty is that we rarely get a chance to hear anything of a player’s life since the focus may be the latest wrinkle in the Sicilian or the latest game by Magnus Carlsen. This is indeed unfortunate.

Majur Juac is a person whose stature is not easily missed in a tournament hall. With his gangly frame and ebony skin tone symbolic of Dinka tribesman, his unassuming persona belies a fascinating journey for the former Sudanese refugee. Last November, the Wall Street Journal had featured a story on Juac who detailed his journey fleeing from the embattled Sudan, a country that was literally on fire from war.

The raging civil war tore families apart and orphaned thousands of “Lost Boys” who made a grueling 1,000-mile trek which included crossing crocodile-infested waters. By the time they reached a refugee camp in Ethiopia, the group had ballooned to 20,000 and would stay in the camp for four years under harsh conditions. He then had to flee to Kenya after Ethiopia imploded into civil strife. It was in this camp that he taught himself the game of chess. It would be a mental escape that would serve him well later. 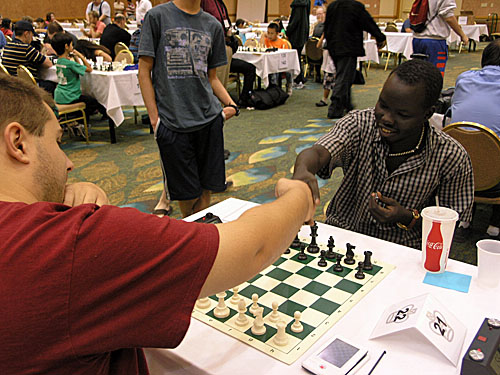 A smiling Majur Juac at 2011 U.S. Open playing against NM Damir Studen. He has come a long way since fighting for survival in his war-wracked country of Sudan. Photo by Daaim Shabazz. 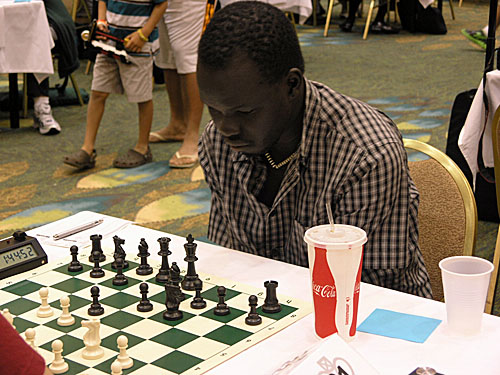 Years later, he found himself in Washington DC after applying for a visa. His brothers had been granted entry previously and settled in DC where most of the diplomatic stations reside. Dupont Circle was probably Juac’s first stage in the American chess scene. This was followed by a serendipitous trip to New York where he won a tournament. After arriving in New York on a whim, he was approached by Michael Propper who offered him a position as a chess teacher with “Chess NYC”. This has allowed him to fulfill his dreams. Speaking about his love of chess, Juac states, “It’s something that I cannot live without.”

"On the Beat" with MC's Amy Lee