FM Warren Elliott is considered one of the “veterans” of this year’s Jamaican National Championships despite the fact that many of the veteran masters IM Jomo Pitterson, FM Shane Matthews and CM Duane Rowe were not present. Defending national champion Andrew Mellace was set to defend his crown and three-time national champion Damion Davy wanted to put his stamp of authority on the scene. There was even a bit of banter on a Facebook groups about this looming battle.

This tournament featured 12 players of national repute including Ian Wilkinson, Jamaica’s federation President and several past and present national champions (Elliott, Davy, current national champion Mellace and Russel Porter), past and present Olympiad players (Malaku Lorne, Daren Wisdom, Brandon Wilson, Peter Myers). There was one woman competing but her name was not 10-time champion Deborah Richards-Porter. National women’s player Melisha Smith was the sole female representative and was looking to make a respectable showing. Junior champion Sheryas Smith was also sharpening his machete for some master scalps. Young upstart and debutante Kevron Campbell was also on the prowl for ELO gain.

There were no clean sheets in the first four rounds before the marquee matchup of Elliott-Davy. The game was a positional Guioco Piano with Elliott showing his ill-intentions with 13.g4?! This was looked to be a dubious idea since black could have improved his position. However, Davy threw caution to the wind and played 17…f5?! instead of 17…g6. He must’ve missed white’s shot after 18. exf5 Bd5 (diagram) 19. Qxd5+! Qxd5 20. Bb3. This gave white a lasting initiative which he duly converted.

Elliott bore down creating nasty mating patterns and black was unable to stave off the attack. With his main competitor out of the way, Elliott continued his rampage through the field for a scorching 10½/11. This is Elliott’s seventh national crown winning in 2000, 2001, 2004, 2005, 2007, 2010 and 2015. He has tied the record of seven wins held by the legendary FM Shane Matthews and has done so in only nine appearances. 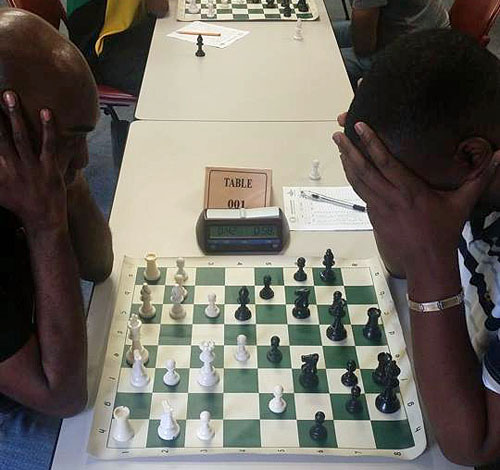 There were other outstanding performances such as Davy’s 9½/11 with his only loss being to Elliott and a draw with Wisdom. In a battle for second place, Davy beat Lorne who ended in third position on 8/11. Smith and Wilson came in the fourth position on 7/11 while defending champion Mellace ended a bit above par on 6/11.

HHCF Book: "Chess is Jiu-Jitsu for the Mind"