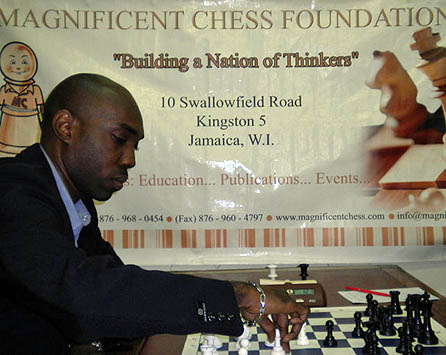 Jamaica’s number one ranked player, FIDE Master Warren Elliott, won the 2010 staging of the National Chess Championships, recently held at the Medallion Hall Hotel and the Norman Manley Law School from April 16 to 25.

Elliott finished with nine points from eleven games to secure the top prize and claim his sixth hold on the National Champion title, after scoring a draw in the final round against Peter Thomas. Elliott’s previous wins were in 2000, 2001, 2004, 2005 and 2007 and he is now one win away from tying the record of seven wins held by local legend National Master Shane Matthews.

In second place was FIDE Master Jomo Pitterson who drew his final round game against National Master Mark Holness to end on 8.5 points, while third place went to National Master Russel Porter who ended on seven points after drawing with Daren Wisdom. The top three players were the only unbeaten entrants during the championships.

The tournament was sponsored by the Magnificent Chess Foundation, the Medallion Hall Hotel and the Norman Manley Law School, with contributions coming from the Sports Development Foundation.

The seemingly unbeatable Woman FIDE Master Deborah Richards, continued her dominance of Women’s Chess in the English-speaking Caribbean, by scoring a perfect ten points from ten games to completely outclass her rivals in the National Women’s Chess Championship, which took place at the Medallion Hall Hotel and the Norman Manley Law School from April 16 to 25.

WFM Richards dispatched each of her five rivals twice, with the white and black pieces, to secure her ninth straight hold on what must now be a very a familiar trophy. Richards, who has played in the main event with the male players on two previous occasions in 2005 and 2006, opted to play only in the Women’s event this year.

Barrett finished on six points after scoring a final round victory against Krishna Gray. Melisha Smith, who was favoured to take second behind Richards, finished third on 4.5 points.

The top players from each event will now focus on preparing for the 39th Chess Olympiad scheduled to take place from September 20, 2010 to October 4, 2010 in the town of Khanty-Mansiysk, in the Western Siberian region of Russia. At the 38th staging of the Chess Olympiad, which took place two years ago in Dresden Germany, Jamaica’s main event team finished tied in 64th position, its highest placing ever, by far. 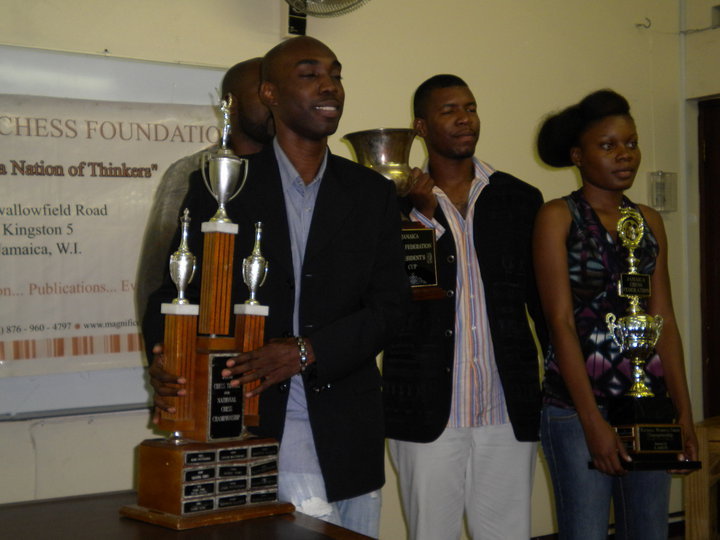